A new wave of anti-capitalist protest

This article is over 20 years, 11 months old
The rich and powerful from across the globe were to gather in the Swiss ski-resort of Davos this weekend. But right across the world their system is being challenged. At Davos protesters planned demonstrations outside the rulers' World Economic Forum.
Downloading PDF. Please wait...
Saturday 27 January 2001

The rich and powerful from across the globe were to gather in the Swiss ski-resort of Davos this weekend. But right across the world their system is being challenged. At Davos protesters planned demonstrations outside the rulers’ World Economic Forum.

The protests are worrying the rich. Charles Andre Udry, one of the organisers of the protests, says, ‘Not just the police but the army are mobilising’ against the demonstrations. The Davos protests were designed to highlight the way in which crucial decisions which affect billions of lives are taken by an elite of businessmen and politicians.

Those people care only for profit and have no regard for real democracy or the interests of the vast majority of the world’s people. Tens of thousands of people were also gathering this week in Porto Alegre in Brazil for the biggest conference of campaigners, trade unionists and environmentalists that has ever happened in South America.

The conference theme is a challenge and a hope: ‘Another world is possible.’ Here in Britain the same themes will run through the series of Globalise Resistance conferences over the next fortnight. They will feature a wide range of speakers from every part of the movement against corporate rule.

The Globalise Resistance meetings are a great chance to discuss the issues at stake in that movement, and organise for a broader and more united fightback. Everyone who can should be there.

‘I will be speaking about the issue of GM foods. Potentially irrevocable decisions are being made about what we eat. We have to ask who is making these decisions. GM foods do not deal with world hunger or ownership of land, or who makes the profits.’
Jean Lambert, Green Member of the European Parliament, who will be speaking at the London Globalise Resistance conference

‘We won’t get debt cancellation out of the current system. How many people have to die before the debts are written off? We have shamed the creditors into shaving off a portion of the debt. But they have not cancelled the vast bulk of it because they would lose control over the countries which presently are shackled by the banks and the international system.

We need to renew the struggle around debt and link it to the question of global economic justice. I will be at the conference to discuss these issues and, I hope, spark a debate. The left has to recognise that people are more sophisticated about these arguments than they are often given credit for.

I’m convinced the left has to upgrade its respect for the audience and bring in more people on a higher level of understanding. The Globalise Resistance conference is important because it is a step toward breaking down the narrow, inward looking nature of what the left has been in the past.’
Ann Pettifor, one of the founders of the Jubilee 2000 anti-debt movement, who will be speaking at the London Globalise Resistance conference

The conferences and protests against the global system come in the same week that scientists have revealed further devastating evidence that global warming threatens the planet’s future. The United Nations Intergovernmental Panel on Climate Change says that millions are at risk from flooding and other sharp shifts in the weather. The threat is a direct result of big business pumping out greenhouse gases, and of governments which refuse to tackle pollution. Only the mobilisation of ordinary people can head off disaster and force the action needed.

Our world is not for sale

Iain Banks Novelist will speak at the Glasgow Counter Conference;

Stansted workers are angry over pay

'Time to stand up' 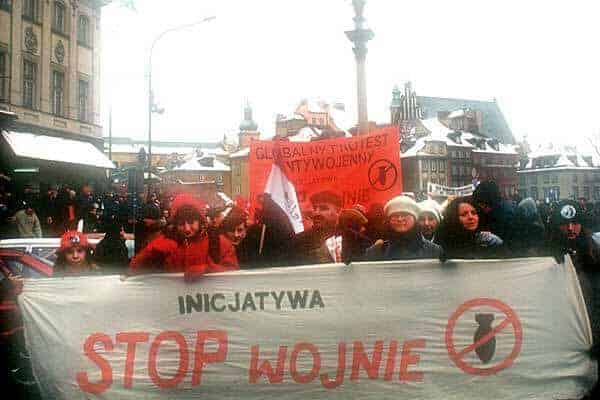