This article is over 20 years, 11 months old
Over 2,000 people packed into the continuing Globalise Resistance tour around the country last week. The previous weekend 1,800 people had attended the tour's Glasgow and London legs. \"The tour stormed through Birmingham with a lively conference bringing together activists- black and white, old and young, red and green,\" says Chris Crean from West Midlands Friends of the Earth, one of the 250 people who attended the Birmingham conference.
Downloading PDF. Please wait...
Saturday 17 February 2001

Over 2,000 people packed into the continuing Globalise Resistance tour around the country last week. The previous weekend 1,800 people had attended the tour’s Glasgow and London legs. ‘The tour stormed through Birmingham with a lively conference bringing together activists- black and white, old and young, red and green,’ says Chris Crean from West Midlands Friends of the Earth, one of the 250 people who attended the Birmingham conference.

‘The largest and most exciting political meeting in the city for years. For me, it was the best thing I think I’ve ever been to in 15 years of political activity,’ was the reaction of lecturer Paul Blackledge to the 500-strong Leeds conference. Manchester saw 600 people attend, Coventry 160 people, Liverpool 200 people, Sheffield 300 and Norwich 75. Some of the participants sent us their reports which we feature here.

Guy Taylor was one of the organisers of the Globalise Resistance tour. He says: ‘The response to the tour outstripped all our expectations. The enthusiasm was awe inspiring. The aim of the tour was to radicalise and to mobilise. People involved in the tour were going to join the blockade of Faslane on Monday. We are also planning pickets of Nike and Gap over sweatshop labour on International Women’s Day in March, and we are holding planning meetings to mobilise for the protests at the G8 summit in Genoa, Italy, in July. Get involved!’

The world can seem a frightening place at times, with war and exploitation rife, yet listening to ordinary people talking about the effects of globalisation you realise you can change things for the better. When a young woman from People and Planet explained that over half the world starves yet we live in a society where women pay to be slim, I knew it was time to put away cynicism.

As a single parent and cutlery worker through the 1980s, I met low pay and poor union organisation head on. Blair replaced Thatcherism and continues to privatise what rightfully belongs to us all. I am sickened by the bosses’ pursuit of profit wherever it is in the world. Now I am inspired to join the fight to change things.
Freda Smith, social worker with the elderly, Sheffield

Along with my wife and son, I went to the Globalise Resistance tour in Liverpool. I was pleased to see old friends from the left. I think the idea of a Socialist Alliance is the way forward. We have one common enemy so we should fight on a united front. The opening rally was a fantastic taster of all the good things to come.

I was inspired by all the speakers, especially the Gulf War veteran who described being thrown in at the deep end, with 24 hours notice and 12 hours training, but also by Kevin Danaher. To round off the day we watched the video of Seattle, This Is What Democracy Looks Like. It left me with pride for the demonstrators, indignation at the police and my commitment renewed.
Brian Dooley, sacked Liverpool docker

Local campaigners spoke with passion on subjects such as the ongoing Dudley hospitals strike, the city council’s proposals to close 30 residential care homes, and threats from depleted uranium following a fire at a nearby ordnance factory.

Information from various international campaigns was shared, with the phrase ‘Think globally, act locally’ flowing throughout the event. The formal sessions were interwoven with plenty of time for networking and planning the next action. Tips were exchanged, as were slips of paper with email addresses, while leaflets, pamphlets and books changed hands. The day laid the foundations for similar events and networking.
Chris Crean, West Midlands Friends of the Earth

All of a sudden politics in Leeds is a lot more interesting and exciting! Some 500 people attended the Leeds counter-conference, and heard Kevin Danaher launch an impassioned critique of the international elite’s vision of globalisation and call for revolutionary activity against their system. A speaker from the floor best expressed the feeling of the conference when he suggested bringing the spirit of Seattle to Leeds!
Paul Blackledge, lecturer

This was an excellent opportunity for campaigners and activists from Coventry and surrounding areas to come together. Lots of ideas were shared, and names and addresses exchanged. (It also ran smoothly and according to plan, which was nice…)

The workshops prior to the final rally were invaluable, as they were both informative (on issues such as Seattle and the threat posed by GATS) and, perhaps more importantly, a chance for the different shades of reds and greens (and others!) to discuss common ground and differences. For me, Globalise Resistance showed that the unity and potential is there, but for it to be fully realised all of us have to keep talking. Great event!
Steven, Warwick University People and Planet

‘Globalise Resistance’ became more than empty words when the tour reached the University of East Anglia. We heard incredibly inspiring and forceful speeches.

We are not victims of the global order-we are actually making history ourselves, through direct action, strikes, the media and, most importantly, through talking with people! When we come together we will make our resistance as global as capitalism!
Elise Christensen, University of East Anglia student

The conference in Manchester was the most exciting event I’ve been to for years. It was so well organised, with sessions well chaired and running to time. It was amazing to have so many different groups represented, and a fantastic range of stalls packed with information and ideas.

The atmosphere was really friendly and buzzing. There was a great feeling of everyone wanting to work together, and I was particularly pleased to see the peace movement and the anti-capitalist movement working so closely together.
Norma Wilson, Greater Manchester & District CND and regional development worker

Nearly 100 people attended the Conference for Global Justice in Bangor, north Wales, last Saturday organised by Cynefin y werin (Common Ground). Angharad Tomos from the Welsh Language Society in her conference speech described the event as ‘a carnival of people who want to change the order in Wales and across the world’.

Cynefin y werin brings together activists in groups like Friends of the Earth, Amnesty International, CND and Earth First. ‘Wales is multinational land. It is orientated towards attracting investment from multinationals,’ explained lecturer John Lovering, in a session about an ethical economy for Wales. ‘Yet the total number of jobs is falling. There were 610 mines-now there is only one.’
Helen Shooter reports from Bangor 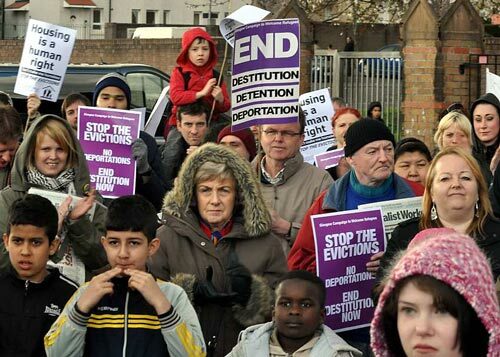 Two cheers from pickets for deal to end the strike

Boardroom sit-in to save Camden surgery 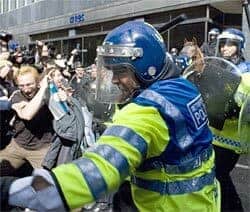