This article is over 15 years, 8 months old
Respect shattered the Labour stranglehold on the east London borough of Newham last week, winning a magnificent 20 percent in the mayoral election and 26 percent across the entirety of the council seats.
By Joseph Choonara
Downloading PDF. Please wait...
Saturday 13 May 2006

Respect shattered the Labour stranglehold on the east London borough of Newham last week, winning a magnificent 20 percent in the mayoral election and 26 percent across the entirety of the council seats.

The unfairness of the voting system means that Respect gained only three of the 60 councillors. But it is now firmly established as the second party in the borough – and is breathing down Labour’s neck.

Hanif Abdulmuhit, 31, is one of the newly elected Respect councillors in the Green Street West ward, having won 1,751 votes – almost 200 more than his nearest Labour rivals.

He will join Respect members Abdul Karim Sheikh and Asif Karim as councillors for the ward.

The result was announced following a lengthy and tense wait at the count on Friday of last week.

After his victory was confirmed, Hanif told Socialist Worker, “This is the best day of my life, and probably the longest day too.

“Newham is the heartland of Labour, but this vote shows that people are fed up with its direction.

“The fact that Respect was out campaigning every day was very important. For the first time people said, ‘It really feels like there’s an election on’.”

Abdul, who served as a Labour councillor for 16 years before joining Respect, said, “Our victory came through determination and the amount of work put into the ward. It helped that I’ve built up a good relationship with people over the years.

“We have to build on these results. We were second in lots of wards, getting over 1,000 votes. It’s now clear that we’re the opposition.”

Another high point came as Respect candidate Abdurahman Jaffar forced a second round run-off in the mayoral election. Abdurahman’s vote of 12,898 prevented New Labour mayor Sir Robin Wales taking the 50 percent he needed to win outright in the first round.

In his acceptance speech, Wales admitted that the Labour Party “had not had the best week… and we are facing, clearly, a challenge from Respect”.

But Wales went on to launch a series of slurs against Respect, making veiled references to “those who divide our community”, and arguing that the BNP vote in Barking & Dagenham shows what happens when a “community is fractured”.

Hanif responded, “Labour can’t argue with us on policies – over the privatisation of schools or the sell-off of Queens Market to a multinational – so they accuse us of being a ‘Muslim party’ or a party of extremists.

“It was clear from canvassing that we won white votes, black votes and Asian votes. We won votes from Hindus and Sikhs. All these groups in Newham face exactly the same issues.”

This was a one-party borough where Labour took it for granted that it ran the council.

“Respect stands for the poor, the neglected and the marginalised. People of all religions and races came and voted for us. The Muslim vote was very divided.

“But Labour makes these allegations against us. It calls us extremists.

“Well, that’s the same thing the establishment said about the first Labour MP, Keir Hardie, when he was elected in Newham.”

Paul Phillips, a local teacher who has lived in the borough of Newham all his life and who campaigned for Respect, reflected on the result. “To achieve this within a couple of years of Respect being launched is amazing,” said Paul.

“It felt like our campaign politicised people in Newham, by providing an alternative. Everyone knows about Respect now.

“We tirelessly campaigned and people responded to it. The turnouts were extremely high for Newham.

“The Tories’ vote crumbled, people looked to the left.

“In the neighbouring borough of Barking & Dagenham, the BNP gained votes because the Labour Party has been completely complacent.

“There’s more to be done in Newham. We need to get more deeply involved with trade unions and other groups. But this result is a great start.”

While Respect members were delighted with their three councillors in Newham, many were frustrated that the first past the post system hid the true extent of the organisation’s support. 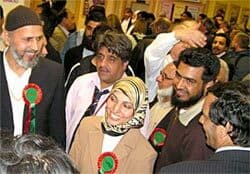 Respect gets good results around the country 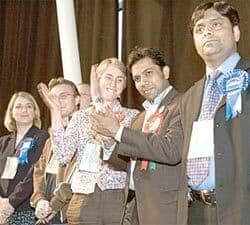