A vote to stay out and reject company’s bribe

This article is over 17 years, 5 months old
DRIVERS AT First Buses in South Yorkshire voted on Monday to continue their strike following a ballot on a new offer from the bosses.
By Alan Kenny
Downloading PDF. Please wait...
Saturday 07 August 2004

DRIVERS AT First Buses in South Yorkshire voted on Monday to continue their strike following a ballot on a new offer from the bosses.

About 700 drivers voted against the deal, with 500 voting for it. The offer gave workers the 30p rise they had been asking to be backdated to 1 April.

However, the money was to be taken from one day’s sick pay.

Part of the offer was a sweetener—all drivers would get £200 on their return to work.

As one driver said before the ballot result, “This is where the strike really starts.

“The ballot will be close. It’s not so much the people who’ve been down to the picket lines regularly.

“But for those who have been at home reading the rubbish in the Sheffield Star, they’re the ones who are going to be tempted by the £200 and may vote yes.

“You see, this has never just been a dispute about pay. This strike is about our conditions as well.

“It’s about the hours we work, and it’s not good enough for them to turn around and say we’ll take the money out of sick pay.”

The pressure now is really on the management at First Group.

The local press has been reporting that high street shops like Marks & Spencer in the city centre are complaining about a dip in their profits.

There was £100 from South Yorkshire NUJ, £112.54 collected round the offices in Sheffield probation department and £111 collected from AUT union members at Sheffield University.

Activists are now setting up support groups across South Yorkshire to raise solidarity. 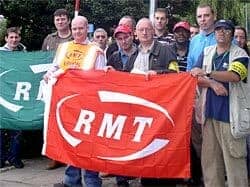 Post workers in Bridgwater walk out unofficially against bullying

Driven to go all out in Edinburgh