This article is over 9 years, 11 months old
Children led a march last Saturday against plans to force their schools to become academies. Up to 1,000 people including parents and teachers joined the demonstration through Haringey in north London.
By Sadie Robinson
Downloading PDF. Please wait...
Saturday 04 February 2012

Children led a march last Saturday against plans to force their schools to become academies. Up to 1,000 people including parents and teachers joined the demonstration through Haringey in north London.

Marchers carried homemade placards with the names of the schools—Downhills, Noel Park, Nightingale and Coleraine Park.

Alison Lloyd is a parent at Downhills, which has had the most high-profile campaign.

She told Socialist Worker, “Gove says his plans are about standards. I think it’s about privatisation. I don’t want big business running schools.”

Lauren Dobie, a parent at Nightingale, told Socialist Worker, “We need more funding. I’m worried that an academy would change the admissions code. Our school is inclusive—I don’t think academies are.”

Julie Davies, an NUT union rep at Downhills, told Socialist Worker that she was “delighted” with the turnout. But she added that the battle was far from over.

Alan Stanton, a Labour councillor for Tottenham Hale, told Socialist Worker, “Gove is a bully. We have a choice about schools—except when we disagree with Gove.”

Other trade unionists came too. Philip Lewis is vice-chair of Camden Unison. He said, “Labour are supporting the cuts so there’s no opposition in parliament. There’s only one route left—we need a massive movement of ordinary people.”

Arun Mistry, a primary school teacher, brought an “Occupy LSX” banner on the march. He said, “I see this as part of a global response to global attacks.”

Kevin Courtney, deputy general secretary of the NUT, told Socialist Worker, “The fight at Downhills has exposed how sharply ideological the government’s education policy is.”

Children chanted, “Academy—calamity!” and “Get Gove out!”

The campaign at Downhills had led to Gove retreating on plans to impose an academy. Instead, the school has had an Ofsted inspection.

But Gove will try and use Ofsted’s verdict to force academy status on Downhills—and hasn’t backed off from targeting the three other schools either.

Parents voted overwhelmingly against the academy plans at Noel Park school this week.

The campaign to stop him must continue. 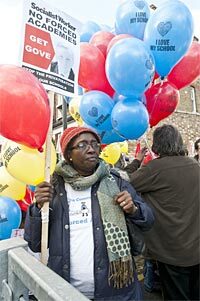 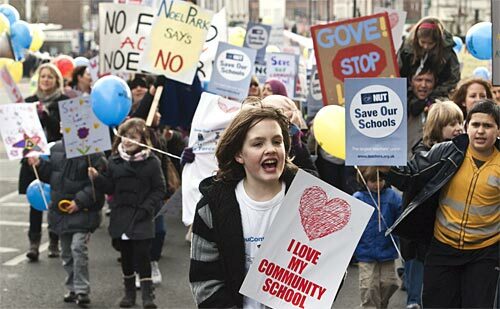