This article is over 16 years, 11 months old
ON FRIDAY 15 July the news broke that Lambeth council in south London had reversed its decision to put an academy on the site of a primary school in Clarence Avenue.
By Sara Tomlinson, joint secretary Lambeth NUT
Downloading PDF. Please wait...
Saturday 30 July 2005

ON FRIDAY 15 July the news broke that Lambeth council in south London had reversed its decision to put an academy on the site of a primary school in Clarence Avenue.

Campaigning has achieved this great result. Previously the council had said it would carry out consultations until next year, but many people believed the decision had already been made and nothing that we did would make a difference.

Now, says the council, “Having listened to all views, the recommendation is not to go ahead with the plans for an academy.

“There was strong opposition from parents to several aspects of the proposal, especially the need to close Glenbrook primary school.”

Our success is based on a year of lobbying, letter writing, a joint union meeting with a resolution to strike, a meeting with our MP, attending every council meeting, leafleting the esate and the local streets, writing to the newspapers, contacting potential sponsors, sending letters to every head and chair of governors, informing union members across the boroughs and across unions, sending press releases and holding publicity events. And this was just the pre-consultation phase!

We also found it useful to remind people of the record of private sector involvement in running public services.

Lambeth does need more secondary schools, and after this success we will press for a comprehensive, mixed, non-denominational school. 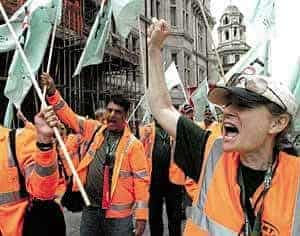