This article is over 13 years, 6 months old
NUT union members at five schools in Croydon, south London, struck on Tuesday of this week over plans to close their schools and replace them with academies.
Downloading PDF. Please wait...
Tuesday 27 January 2009

NUT union members at five schools in Croydon, south London, struck on Tuesday of this week over plans to close their schools and replace them with academies.

Teachers voted by over 90 percent on a 40 percent turnout to back “discontinuous, sustained strike action” against the change of employer that the plans would force upon them.

The action will involve around 120 teachers across the five schools – Ashburton High, Juniors and Infants, Addington High and Westwood Language College.

The strike follows the announcement by Croydon council that its academy plans remain largely unchanged despite consultation.

Dave Harvey, secretary of Croydon NUT branch, said, “We really thought there might be some changes but this outcome confirms our decision to take strike action in the five schools is the right one.”

The Transforming Croydon Schools (TCS) cabinet committee was to meet on Wednesday of this week to review the final proposals.

Opinion among teachers, parents, students and even headteachers is turning against the plans.

Some 60 people lobbied Croydon council on Monday of this week to protest against the proposals.

A planned strike against academies by around 50 teachers in the NUT union at the Royal Docks school in Newham, east London, had been suspended as Socialist Worker went to press, after the Mayor agreed to meet with the NUT. 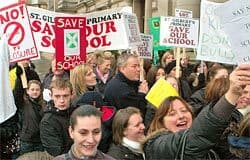 Anger in Glasgow at attack on education