Thousands of students across Britain were preparing for huge strikes this Friday to demand urgent action on climate change.

They are part of the globally ­coordinated #FridaysForFuture school walkout movement. The strike was likely to hit thousands of primary and secondary schools, ­colleges and universities.

It follows a 20,000-strong ­walkout in Britain last month. Now even more students are organising strikes in their schools.

Jess Maddison is a student at Manor Community Academy in Hartlepool. She was organising a strike at her school and a regional rally in nearby Middlesbrough.

Jess told Socialist Worker, “It’s important to strike because it sends the message that we’re all united in cracking down on climate change.

“It’s a really pressing issue—you only have to look outside and see extreme weather conditions.

“It’s been 20 degrees in February, then one week later, there’s huge storms.

The school students’ sense of urgency has connected with many joining in strikes for the first time—and organising their own.

Ollie, a 16 year old student, spoke to Socialist Worker about how he is helping to organise the Youth Strike 4 Climate in Hereford.

“Children are growing up in a dying world they can’t save. It’s a world dying of greed,” he said. “We’re protesting to raise awareness that this isn’t an issue that can be ignored any longer.”

Students in Hereford will use the strike day to speak to MPs and councillors about what they are planning to do about the climate crisis.

“If even the youth of today are aware what a severe emergency this is and is taking action, then it begs the question why aren’t politicians?” asked Ollie. 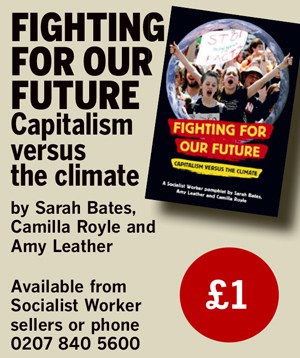 The movement is throwing up all sorts of questions about the most effective way to combat climate catastrophe. Jess, a vegan, became interested in climate change through animal liberation activism.

“There’s a lot we can do on an individual level, but the ­government has got to step in and declare a ­climate emergency,” she argued.

Ollie agreed. “We can all individually make changes at home by reducing meat consumption and the amount of plastics we use,” he said.

“But it is ultimately up to the governments in charge to move to renewable energy sources and limit deforestation, plastic use and ­manufacturing.”

Edith, a student in Westminster, central London, has been on ­anti-austerity, anti-Brexit and ­anti-racist demonstrations before.­

But she said February’s strike rally in Parliament Square was “quite special—it felt like change was in the air”.

She echoed many strikers when she said her generation has a particular interesting in fighting the threat of climate change.

The movement means “a lot for young people, we finally feel part of something and feel engaged,” she said.

Theresa May blasted students for “wasting lesson time” when they struck in February.

But Edith said instead of criticising the strike, politicians should “come to any sixth form and listen to us and our ideas for policies”.

This is an international movement, and it is quickly growing stronger

The school strikes set to take place across the globe this Friday were set to become one of the largest actions for the climate ever.

Hundreds of thousands looked set to strike together, with 32 countries joining the action for the first time.

Bolivia, Costa Rica, Egypt, Greece, Iceland, Kenya and Pakistan are just some of the countries where a strike was planned for the first time.

“We’re looking at how to expand the movement and make sure we get into schools and colleges in every single region.”

This global aspect of the movement is one of its strengths.

“We internationally coordinate with other countries who are striking, we’ve got people setting up the movement in new countries, and we’re doing things together,” said Cyrus.

Representatives from 20 climate strikes spoke to politicians and attended a debate at the European Union Parliament in Strasbourg, France, this week. 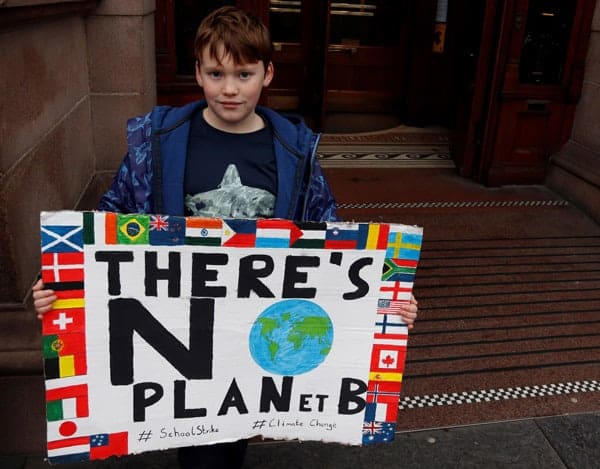 One of them, 11 year old Finlay Pringle from Ullapool in the Scottish Highlands, spoke to Socialist Worker. “We’re going to speak to the people who are paid to look after us. They’re doing nothing so we need to tell them what to do and how do it,” he said. Finlay has struck every Friday with his sister Ella and her friend Megan.

“We stand outside our school and a lot of people say we should be in school but I feel like we’re learning more on our strike than we do in the school,” he said.

He added, “Every country in the world needs to starts doing it, and then they’ll listen.”

One of the biggest strikes is set to take place in Australia where 50 rallies are planned.

Students are demanding that construction on the new Adani coalmine is stopped, no new fossil fuel projects are started, and a transition to 100 percent renewable energy by 2030.

“What we want is more learning in schools, and less activism”, he said after thousands of students walked out.

Our collective strength is the key to how we win

Young people—led by teenagers—have shown that taking to the streets and collective action will be central to fighting climate change.

The threat exists on a global scale, so the movement will need to be big enough to tackle it.

There needs to be more action, demonstrations and strikes—and they should involve broader layers of people.

It can’t be left to striking teenagers or small groups of dedicated activists, although their struggles are inspiring.

The fight for the climate affects everyone—and all ordinary people share an interest in fighting together.

One of the best ways to organise action is through trade unions.

They are potentially able to mobilise millions out on the streets.

Workers could be a powerful element of the movement for climate justice. But there has been precious little practical support unions, although there are some signs that workers could join in the action.

In France, the CGT union federation supports the demonstrations, and said environmental issues were “inseparable from our struggles”.

This week the Australian Education Union (AEU) joined 20 other unions and released a national statement supporting the climate strikers.

“The AEU supports the democratic right of students to take direct action, giving voice to their very real concerns about the impacts of climate change, and protesting the inaction by the federal government,” it said.

It’s not enough to applaud the courage of the school student strikers—workers should follow their lead and fight for similar action.

Activists from the Extinction Rebellion group are organising action in the lead up to an “International Rebellion” fortnight of protests next month.

Campaigners created a “sea of blood” at Downing Street last Saturday to symbolise the “hellish future if governments don’t take emergency action now”. Around 400 gathered in central London to spill 200 litres of the mixture made of syrup, food colouring, water and cornflour.

Activists also began a walk from Land’s End, Cornwall, to London on Monday. Organisers say up to 1,000 people will join the walk, which is set to arrive by 15 April.

In Colchester, Essex, up to 300 activists held a rally last Saturday and marched through the town centre.

It was led by a coffin to symbolise the mortal threat to human and animal species. Protesters staged three “die-ins”.

Thirteen Extinction Rebellion members were arrested in Edinburgh after occupying the National Museum of Scotland.

They were part of a demonstration against the Scottish Oil Club annual dinner, hosted at the museum.

Activists chained themselves to railings and dropped a banner from the balcony of the museum.

Around 40,000 marched in Amsterdam last Saturday to demand urgent climate action, in the first demo of its kind.

Much of the Netherlands already sits below sea level, and will be particularly vulnerable to rising sea levels.

“I would like to tell you that you can solve the whole problem by adjusting your personal behaviour. 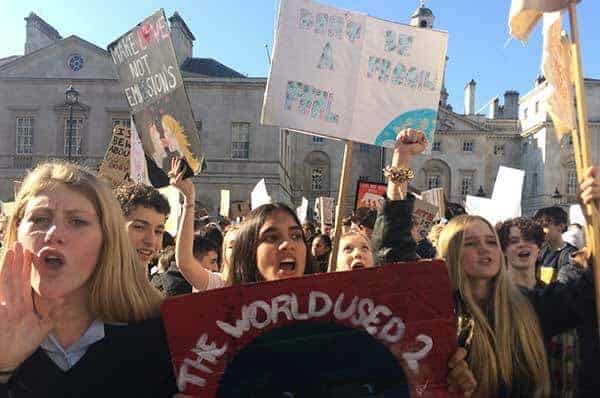 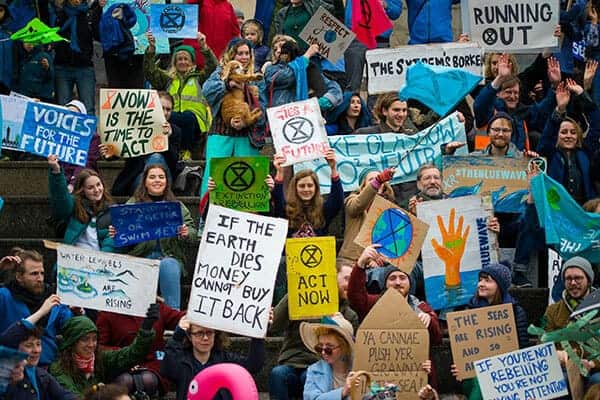 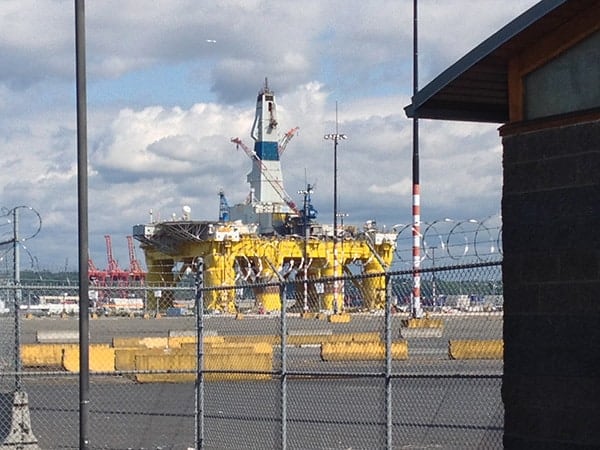