Activists’ anger at ‘debate’ with BNP

This article is over 12 years, 3 months old
Anti-fascist campaigners are promising a storm of protest in response to the news that Nazi leader Nick Griffin is to appear on the BBC’s flagship Question Time programme in London on Thursday 22 October.
By Esme Choonara
Downloading PDF. Please wait...
Tuesday 29 September 2009

Anti-fascist campaigners are promising a storm of protest in response to the news that Nazi leader Nick Griffin is to appear on the BBC’s flagship Question Time programme in London on Thursday 22 October.

Broadcasting union Bectu is the latest organisation to throw its weight behind the protests.

Bectu’s general secretary Gerry Morrissey says that the union will support any of its members at the BBC who refuse to work on the programme.

He said, “I have raised this issue with the BBC’s director general Mark Thompson.

“He said the BNP has been invited on to the programme because they have won elections, but we strongly disagree.”

He added that the union “will be working with anti-fascist groups to ensure there is a significant turn-out” for demonstrations outside the studios.

The BBC claims it has to invite Griffin, the leader of the fascist British National Party (BNP), on to Question Time under its “impartiality” rules.

And some people seem to have been fooled that Griffin’s appearance is justified in the interest of “free speech”.

But the BNP is not just another political party – it is a fascist organisation that whips up racial hatred and violence.

It certainly has no respect for freedom of speech towards people who are black, Asian, Jewish, gay or disabled.

Giving a platform to Griffin – a fascist who wants an “all-white” Britain and has a conviction for denying the Holocaust – just gives the Nazis the gloss of respectability they crave.

Justice secretary Jack Straw has angered many anti-fascists by agreeing to appear on the programme alongside Griffin.

This has created a row in the Labour Party – which had previously refused to appear alongside the Nazi BNP.

Several senior figures, including Alan Johnson, have already refused to appear with the fascist organisation.

Former cabinet member and Labour MP Peter Hain has asked the BBC to meet him to explain their decision.

He said, “I have told the BBC that I will never share a platform with the BNP. More than that, I will refuse to appear on Question Time until its producers meet with me to justify their reasons.

“Giving the BNP this kind of free publicity elevates them to a level of respectability that they do not deserve.

“We must not rest until the BNP are defeated in this free and tolerant country.”

Unite Against Fascism (UAF) is calling a demonstration outside Question Time in London to protest at the BBC’s decision.

Weyman Bennett, joint secretary of UAF, called on anti-fascists to to keep up the pressure on the BBC.

He said, “The BNP is a Nazi party whose political agenda is to destroy democracy and wipe out ethnic minorities in Britain.

“By granting Griffin a prime time platform the BBC is, in practice, helping to legitimise the BNP and its race hatred.” 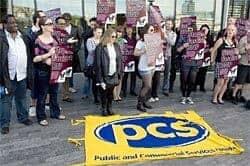