This article is over 10 years, 5 months old
Activists across Britain are building for the national protest against the racist English Defence League (EDL) in Tower Hamlets on Saturday 3 September.
Downloading PDF. Please wait...
Tuesday 19 July 2011

Activists across Britain are building for the national protest against the racist English Defence League (EDL) in Tower Hamlets on Saturday 3 September.

The protest, called by Unite Against Fascism and United East End, is in response to plans by the EDL to march through the east London borough on the day.

Last year some 5,000 people marched through Tower Hamlets when the EDL threatened to come.

It cancelled its protest then in the face of massive resistance—but this time it seems determined to go ahead.

Sarah Creagh, an activist in Tower Hamlets, spoke to Socialist Worker about the campaign.

She said activists had a fantastic response when they leafleted local schools. “People are furious that the EDL is planning to march.

“The leaflets went down well and students took extra to give away to friends and family.

“People want to march to show that this is our borough and we won’t have racists here.”

East London has a proud tradition of standing up to racism and fascism—from the 1930s when thousands opposed the fascist Blackshirts to the 1990s when people stood up to the British National Party (BNP).

The EDL’s threats mean every anti-racist across Britain must build this national protest.

Where next for crucial London Underground fight? 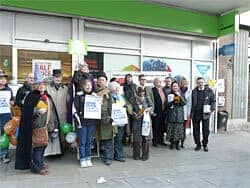 Lecturers and support staff set to strike in London universities