Up to 300 people rallied outside Homerton Hospital in Hackney, east London, last Saturday.

The rally was organised by the Unison union in protest at cuts in the number of midwives and in face-to-face language advocacy—people who translate for people whose first language is not English.

Cuts to community midwifery could mean an increase in the infant mortality rate.

And without the help that comes from face‑to‑face advocacy, patient care will be put at risk.

These cuts are only one part of a threatened £15 million cuts package at Homerton Hospital.

The rally was followed by a march to Hackney town hall.

Picture and report by Gareth Jenkins

The Keep Our NHS Public campaign has called an emergency protest for Friday of this week against the Barts and the London NHS Trust’s plans for cuts.

The government’s cuts put at least 120,000 jobs at risk over the next three years.

The protest will take place from 5pm on Friday of this week at the Royal London Hospital, Whitechapel Road, E1 1BB.

Assemble at the main entrance opposite Whitechapel tube station.

Keep Our NHS Public has called a lobby of the British Medical Association’s London regional council for Thursday of next week.

They will call on doctors to oppose the government’s Health and Social Care Bill.

The Coalition of Resistance and Keep Our NHS Public have jointly organised a public meeting to defend the NHS for Wednesday of next week.

The meeting starts at 7pm, Conway Hall in central London.

TUSC - why we are fighting racism 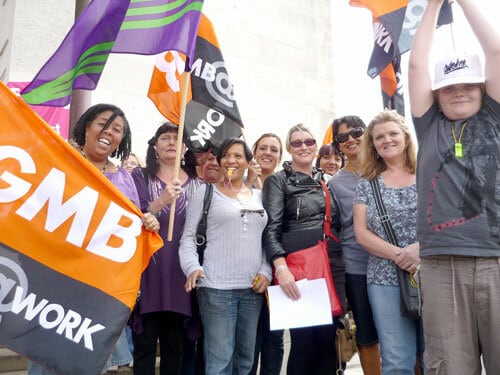