After defeats and victories – how do we strengthen the struggle?

The SWP conference debated the fightback against the Tories and the bosses and the SWP’s role within it—from the mood in the workplaces to the spectacular new movement against the bedroom tax.

Michael Bradley, SWP industrial organiser, described a contradiction that had been laid bare by the defeat at the Ineos petrochemical plant in the Grangemouth oil refinery. The union leaders have not matched the anger that people feel.

He said, “Opportunities to develop mass action and the confidence of the working class have been wasted. Grangemouth was a big setback.

“There could have been a strike and leverage at other Ineos plants.”

Delegates also reported from victories, such as the reinstatement of blacklisted Crossrail electrician Frank Morris and the Wigan Hovis workers’ strike that beat zero hours contracts.

Katrina from Wigan said that prior to the Hovis dispute the local SWP branch only had four members who were active—but all of them went to the picket lines every day.

“We worked to get delegations of Hovis strikers to other workplaces and to build mass pickets,” she said.

Other strikes had shown how unions grow when they fight, such as the low paid workers at South Gloucestershire council.

Health workers described the stress and anger at pay cuts and staff shortages on hospital wards, such as in east London where workers have to reapply for their jobs. And out of it they’re recruiting to the union and gaining reps.

Michael said that the Unite the Resistance initiative had proved it could be both a tool to build solidarity and a forum for debate on how to develop the struggle.

He argued that rolling it out across Britain could help create a network of militants.

Teachers have seen hugely successful strikes called, but also delays and shifts from their union executives.

A solicitor spoke about the campaign against cuts in legal aid and how it has radicalised lawyers—leading the Criminal Bar Association to take its first national action in 700 years next January.

Mark L Thomas from the central committee spoke about how the SWP had been at the heart of a new movement against the bedroom tax that had already changed public opinion—and thrown up a new layer of working class fighters.

Speakers from the floor were proud of the local campaign groups that they have built. But John from Leeds said, “If we are going to beat the bedroom tax, which is a national policy, we have got to have a national opposition to it.”

Mark from Manchester added, “The class struggle of the poorest and the weakest people in the country has been the only one that has won a change in Labour.”

Many delegates discussed the relationship between workplace struggles and broader movements—and the role of organisations such as the People’s Assembly.

Julie Sherry from the CC said, “Every dispute at the moment is highly politicised. Strikes are not just about pay and conditions but also in defence of services and against austerity.”

Mark L Thomas, said, “The People’s Assembly is a challenge for us. It’s part of Len McCluskey’s project to restructure the left, use broader movements to pull the Labour Party to the left.

“But where there are comrades in the room to raise these arguments they will find an echo. In many ways the people who are in the audience are to the left of the people organising.”

Resistance to the neoliberal agenda in the education system formed the backdrop to the student session. Students have been inspired by the strikes of education workers.

Delegates heard 21 speeches from students across 14 different universities during the session. They described a huge politicisation on their campuses.

Fran from Kingston said the mood for revolutionary socialist politics on her campus “is like nothing I’ve ever seen before”.

Jack from Lancaster spoke about the “huge interest in the theory behind our party” as his group has grown from two people to 15 since the start of term.

Similar growth was reported by Lorna from Glasgow, where almost 20 students joined the SWP in the first term.

A number of students talked about the campus occupations they have been involved in this  month. Lewis from Sussex spoke about the crucial role of Socialist Worker Student Society (SWSS).

He said, “We had to counter an argument that a small group of people taking direct action was enough to hit back at management.

“Instead we argued the way to fight was to include the student union and the trade unions. It resulted in 600 strong meeting of students and huge support from the unions that got our suspensions dropped.

“Without SWSS we would not have managed this.”

He said the killing of Lee Rigby in May gave racists such as the English Defence League (EDL) an opportunity to grow—but that successful UAF mobilisations pushed them back.

Weyman also pointed to the threat of Ukip and said that the European elections in 2014 could be dominated by racism towards migrants.

Delegates were proud of the stand Socialist Worker had taken against the scapegoating of Roma people.

There was a debate about how best to stop the fascists.

Many delegates stressed the important successes, such as the broad mobilisation that stopped the EDL entering Tower Hamlets, east London, in September.

But a minority argued that these tactics would not engage the people who are most “angry and militant”. Weyman said that different times required different tactics but that the united front tactic and the building of UAF had been proved right.

Kate, a student at Goldsmiths College, said that she had been building UAF with the NUS Black Students Campaign. She said, “We’re in a great position to build UAF on our campuses”.

The SWP conference was marked by a high level of participation.

Hundreds of contributions on the conference floor were matched by debates in and around the venue.

Around 540 delegates attended and there were over 150 speeches during the debates. Some 21 motions were discussed.

There were also commissions that brought together reports produced by a number of SWP members after those debates. These were also voted on.

In the discussion period that leads up to conference the SWP constitution allows the formation of temporary factions by members who want to change party policy.

The Rebuilding the Party faction was set up in opposition to the current leadership and direction of the party.

The faction was given additional speaking rights to argue its case. At the end of conference, the faction disbanded.

The SWP conference elects the leadership bodies of the organisation.

There were two proposals put forward for the central committee (CC), the leading body of the SWP that runs the party on a day-to-day basis.

Delegates also elected a group of members to form the party’s disputes committee and a 50-strong national committee. 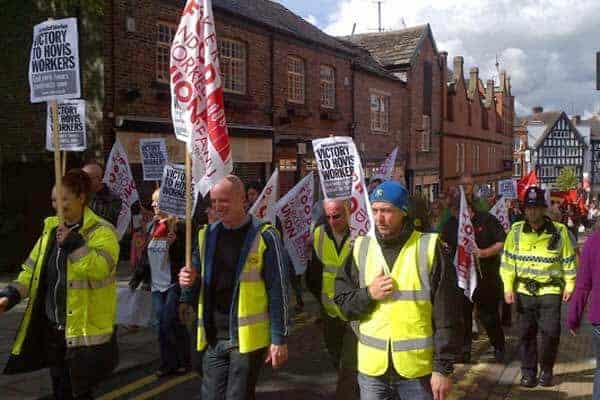 SWP conference discusses the way forward for the left