This article is over 20 years, 1 months old
Over 150 people packed out the debate on the war in Afghanistan organised by the School of Oriental and African Studies (SOAS) Stop the War group last week. Guardian columnist Polly Toynbee and writer on the Independent David Aaronovitch presented their pro-war position.
Downloading PDF. Please wait...
Saturday 08 December 2001

Over 150 people packed out the debate on the war in Afghanistan organised by the School of Oriental and African Studies (SOAS) Stop the War group last week. Guardian columnist Polly Toynbee and writer on the Independent David Aaronovitch presented their pro-war position.

Dr Rathin Roy from SOAS and professor Bikhu Parehk from the London School of Economics put forward their opposition to the war. Both Toynbee and Aaronovitch claimed the war was about building better democracies, relieving suffering and responding to the events of 11 September and combating terrorism.

Anti-war speakers attacked the inconsistency of US-led military interventions around the globe.

Over 200 students at York University attended a debate over the war on Friday of last week between Conservative MEP for North Yorkshire Edward McMillan- Scott and professor Haleh Afshar. Professor Afshar lectures in politics at York University, specialising in Middle Eastern affairs.

The chair of Students Against the War, Hussain Ismail, said, ‘It was great. We just demolished the Tory.’

The atmosphere in the meeting was described as ‘electrifying’ and the audience included 12 school students.

Some 100 people joined a torchlight procession through Colchester last Saturday. Students from Essex University were joined by local peace campaigners, socialists, environmentalists and passers-by in a march round the centre of the town. It was organised by Colchester Peace Campaign.

Up to 80 people marched through Dover last Saturday on a march organised by Dover and Deal Peace Alliance. Tom, one of the organisers explained, ‘This march was very important to a town like Dover. The local press are full of bogus reports of Al Qaida members entering Britain through the ferry port and channel tunnel.’

Over 250 people marched through Oxford last Saturday against the war.

Some 60 people joined a Stop the War march through Middlesbrough last Saturday. 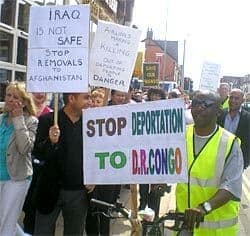 British government is complicit in torture