This article is over 17 years, 2 months old
The British government is using international aid money to promote the privatisation of water and sanitation services across the world.
By Kelly Hilditch
Downloading PDF. Please wait...
Saturday 02 April 2005

The British government is using international aid money to promote the privatisation of water and sanitation services across the world.

Millions of pounds of aid money each year are being spent on public relations offensives and on expensive water restructuring advice, with a massive bias towards privatisation as the only solution.

In 2004 alone the government’s department for international development (DfID) spent £697 million on “technical assistance” or “technical cooperation” — money that doesn’t pay for a particular project or contribute to public spending in poor countries, but instead pays for advice.

Because DfID holds the purse strings, the contracts for the consultation are often not tendered. They go to the British companies that have worked with the government previously.

Halcrow-advised privatisations in Bolivia, Trinidad and Tobago, Ghana, South Africa, India and Sri Lanka have all been reversed or held up by public opposition.The company has received over £2 million directly from DfID for its consultancy work since 1997.

Mark Curtis, the director of WDM, told a meeting which brought anti-privatisation activists together in London last week, “Britain is funding some of the horrors caused by water privatisation around the world—our taxes are funding privatisation.

“The next time you hear Tony Blair or Gordon Brown talking about all the nice things all the aid programmes are doing — building schools and hospitals and the like — think again.

“In Tanzania our money has funded, among other things, a pro-privatisation pop song with the lyrics, ‘Our industries are like dry plants and privatisation brings the rain.’

“Pre-pay water meters, which are illegal in Britain, are being installed by British companies in other parts of the world.”

New Labour is pushing privatisation despite the fact that over one billion people in the world lack access to clean water and 2.4 billion are denied basic sanitation.

Rudolf Amenga-Etego, of Ghana’s National Coalition Against the Privatisation of Water, said, “All the corporations involved in Ghana have been European. As citizens of these countries you have a solemn duty to restrain them and stop the violations in my country.

“People in Britain have a unique advantage — as citizens you can make specific demands of your government and influence what it does. We need your support to keep water in the hands of Ghanaian people, to keep it as a human right, not a commodity for profit.

“To make money out of the poorest people is immoral and unethical. Consultants sell death to our people. If you trade in water, you trade in blood money.”

Pressure from campaigners has resulted in British company Biwater withdrawing its tender for the Ghanaian privatisation process.

Omar Fernandez also spoke at the meeting. He is coordinator for the campaign group Water and Life based in Cochabamba, Bolivia, where a mass revolt threw out private water companies in 2000 .

He said,“The transnational companies have now lodged a court case in Washington against the Bolivian state.

“People in the US began an international campaign that has been very helpful to us.

“Thanks to their campaigning work and their pressure, Bechtel and Edison now want to withdraw their case from the World Bank’s court.”

For more go to www.wdm.org.uk

We are right to take strike action 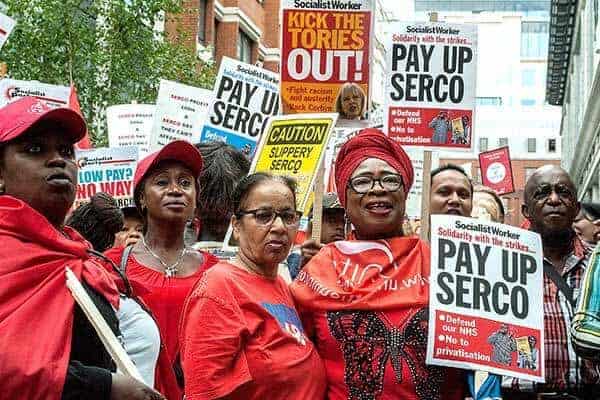 United we will smash the Nazi BNP