They are also fighting for their pay claim. Despite a successful one-day strike on Monday 15 September, management are refusing to talk. Workers staged a half-day strike on Monday morning of this week. This included a motorcade of cars decorated with posters and balloons driving around the site. The outcome of the fight will have major repercussions. West Gorton is the only site where the union is recognised.

The company want to get rid of the union, while union membership has been building up nationally. Lynne Hodge says, ‘The company have been whittling away at our rights for years and it’s now or never to stand up for ourselves. ‘The company aren’t talking to us, but are sending out threatening e-mails to everyone-I’m not impressed by their attitude.’

Ian Allinson, who is standing for the Amicus Unity Gazette slate in upcoming national elections, says, ‘The IT industry is in dire need of stronger unions. ‘The last thing we need is to let an employer get away with breaking the union in one of the key workplaces in the industry.’ Workers are beginning to realise that they could be in for a real fight. Two more strike days are planned for early October.

Amicus is appealing for messages of support and donations. Go to www.ourunion.org.uk for details.

ACTIVISTS IN the Amicus union are out to transform the union in upcoming national executive elections. Candidates for the left wing Amicus Unity Gazette slate are winning support and nominations for the November elections. Pete Gillard, the Amicus Unity Gazette candidate for London Region, told Socialist Worker, ‘I have got nominations from union branches covering almost half the membership in London. These include the AEEU branches Dagenham Automotive, Construction and the seven largest MSF branches in London. All these branches will be writing to every member, 28,000 in all, urging support for me.

For a full list of candidates and more information go to www.amicusunitygazette.com 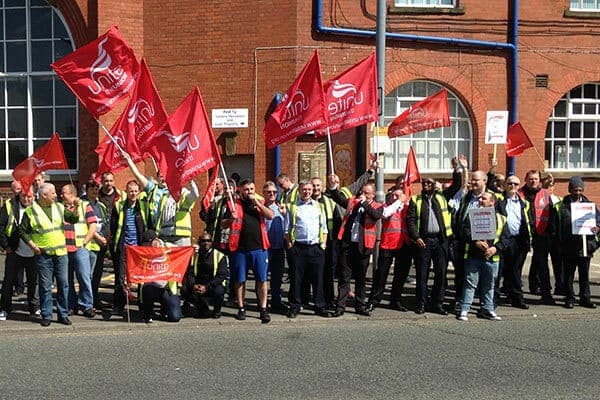 Anti-Atos protests take to streets of Manchester and Sheffield