This article is over 17 years, 9 months old
THE AMICUS general union is seeing a damaging fight on the left.
By Amicus member
Downloading PDF. Please wait...
Saturday 06 November 2004

THE AMICUS general union is seeing a damaging fight on the left.

The union has seen the election of Derek Simpson as general secretary. The Amicus Unity Gazette left wing group holds just under half the seats on the national executive. This was achieved by the unity of the left.

Simpson is being pulled closer to New Labour. He says the Warwick agreement with Labour is a big step forward, and is minimising any disagreements with the government.

Seven of the members of the Amicus executive, including the four Socialist Worker supporters on the executive, refused to vote to repudiate it.

The Amicus Unity Gazette then removed the four Socialist Worker supporters from its caucus for breaking discipline.

The Socialist Worker supporters are sticking to the Gazette election mandate of increasing democracy in the union and returning it to its members.

Jerry Hicks, a Socialist Worker supporter, was removed from the General Purpose and Finance Committee, a working party made up of national executive members.

Jerry is a longstanding union activist who was a key member of Simpson’s campaign in 2001. It is essential that the left continues its unity to represent Amicus’s hundreds of thousands of members, and to reshape the union into the model that was pledged in its election campaigns.

Amicus/T&G merger: what should the new union do? 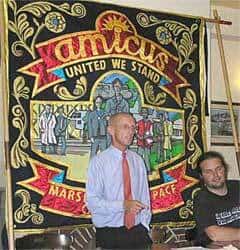 Action to back Jerry Hicks