This article is over 7 years, 0 months old
By Nick Clark
Downloading PDF. Please wait...
Tuesday 19 May 2015

Bosses at the National Gallery in central London have sacked leading PCS union activist Candy Udwin. This is a major attack on a high-profile trade unionist and a serious assault on union rights.

Bosses suspended Candy in January on the eve of the gallery workers’ first five-day walkout against privatisation.

PCS members there are fighting plans to privatise 400 out of 600 jobs, as well as attacks on trade union rights.

Candy received formal notification of the bosses’ decision to sack her on Friday of last week. Around 50 of her supporters protested inside the Sainsbury Wing of the gallery the same day.

On Tuesday of last week, the day of Candy’s disciplinary hearing, gallery workers rallied to support her.

They were set to strike on Wednesday of this week and walk out again from Tuesday of next week until 4 June.

And the union has called a national protest in London on 30 May. It is backed by the People’s Assembly as part of a national day of action.

PCS general secretary Mark Serwotka told the rally last Tuesday that the union would fight to have Candy reinstated.

He said, “There can be no settlement to this strike without a just settlement for Candy, which means the charges are dropped and she is allowed back at work.

“If Candy is sacked then we will take industrial action. And we will mean action, until she is allowed back at work”.

PCS NEC member Paul Williams told Socialist Worker, “Candy is the first trade unionist to be sacked after the election.

“But we know there’ll be more like this to come. So the only thing to do is to get up and fight”.

She said, “I believe Candy’s been sacked because she’s such a great trade union militant.

“When we heard that she’d been sacked I sent a text to UCH people—two of them joined the protest at the National Gallery on Friday.

“Despite moving to another job and another union, Candy continues to fight for the NHS in the Keep Our NHS Public campaign. We will continue to fight for her too.”

Deputy general secretary of the NUT union, Kevin Courtney, told Socialist Worker why the fight to defend Candy is so important.

“I’ve known Candy Udwin for more than 20 years,” he said. “During that time she has been an excellent trade union activist and fighter for social justice.

“Candy helped lead the successful fight at UCH against ward closures in the last years of the previous Conservative government.

“That fight got support from local parents, teachers and politicians. The fight at the National Gallery and to reinstate Candy needs all our support now.”

Join the protest against privatisation plans on 30 May

The PCS has called a national protest against the privatisation of the National Gallery in London’s Trafalgar Square at 1pm on Saturday 30 May.

Workers in the PCS and other unions should organise transport to the demo.

“Imagine what they’ll think in there, when the cowards and the managers peek out from behind the curtains and they see thousands of people on the doorstep saying, no privatisation.

“It will send a tremendous message.”

Serwotka also argued that the fight against privatisation and victimisation at the National Gallery could provide a focal point for resistance to  all the Tories’ attacks.

He said, “We want every union to get people here. It’s the first chance after the general election for trade unionists and campaigners to say, we’re not bowing our heads. 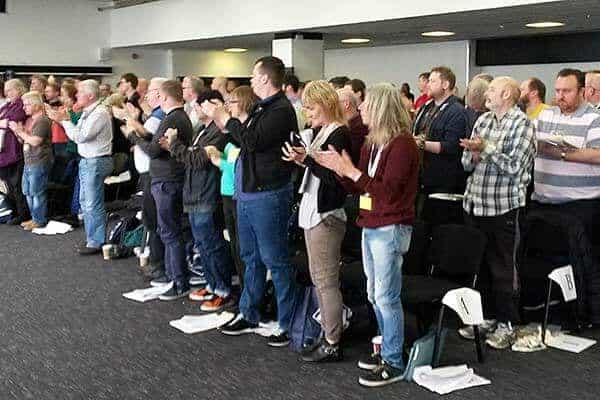 PCS conference discusses how to take on the Tories' austerity