Anger at war grows among soldiers

This article is over 12 years, 2 months old
The bloody cost of the Afghan war has provoked unprecedented opposition among soldiers and their families.
By Siân Ruddick
Downloading PDF. Please wait...
Tuesday 20 October 2009

The bloody cost of the Afghan war has provoked unprecedented opposition among soldiers and their families.

Joe Glenton is one of a number of former or serving soldiers who will join this Saturday’s Stop the War march.

Joe is a serving soldier in the British army who went Awol three years ago after he was told he would have to return to Afghanistan. He is now facing court martial and up to two years in prison.

Army chiefs and politicians praise the troops while they are in conflicts, but abandon them as soon as they have served their interests.

Thousands of former soldiers are either homeless or in prison. Serving in Iraq and Afghanistan is a harrowing experience for many, and post-traumatic stress is having a crippling effect on soldiers.

The army top brass are attempting to quash any dissent to their wars. They tried to gag Joe after he spoke out in Socialist Worker and other media. But he is defying them to speak at Saturday’s demonstration.

Joe’s case is just part of the discontent sweeping the army.

John Tipple, Joe Glenton’s case worker, told Socialist Worker that the legal firm he works for is opening a new department to deal with the a number of soldiers needing representation against the army.

John said, “We have to side with the soldiers against the officers. The soldiers have been left in a mess by the people at the top and are part of the voice against this war.

“When you look at the figures, 69 percent of people are against the war. Talking to soldiers, I feel like I can argue with them about what role the British army is playing in Afghanistan.

“You just have to look at Iraq. It’s run by multinational corporations with no democracy at all. The legacy we’ve left is the death penalty and chaos.

“You can see things going the same way in Afghanistan.”

Daniel Fitzsimons, the former British soldier being detained in Iraq after the shooting of two colleagues working for the ArmorGroup private security firm, is facing the death penalty.

Campaigners are demanding that he is brought back to Britain for a fair trial and that his post-traumatic stress disorder is recognised.

A public meeting is planned in Fitzsimons’ support for 14 November in Bury, Greater Manchester.

For more information go to » www.bringbackdanny.co.uk 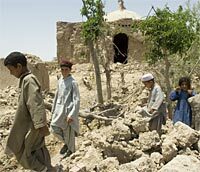 End the nightmare of the Afghan war