THOUSANDS OF people have heard in the last fortnight that their jobs will go. The news undermines New Labour’s claims that its “wise economic stewardship” will guarantee a decent future for all.

There is deep bitterness at the job cuts, and there are calls for action. The union leaders have been forced to say there may be industrial action.

Rank and file workers must demand those words are turned into action. On the eve of the traditional heavy industry shutdown in Glasgow last week, BAE Systems announced it would axe over 1,000 jobs in shipyards at Scotstoun and Govan.

Bosses want to sack 750 manual workers, and 250 clerical and technical staff by the end of the year.

Disgracefully, industry and energy minister Brian Wilson said, “There are a lot of positives in this for the Clyde.” The firm is now asking workers to volunteer for the dole or accept early retirement.

Everyone knows compulsory redundancies are on the cards and that it will take a fight to save all the jobs. The mass sackings were announced despite government confirmation of a 4.3 million order for BAE Systems to build the first six of the new Type 45 destroyers.

“Workers were expecting an announcement which would secure jobs, not result in 1,000 being axed. They were preparing to party, but it has turned into a wake,” said John Edmonds, general secretary of the GMB union.

Many workers now fear for the longer term future of shipbuilding on the Upper Clyde. New Labour and the company have been involved in a cynical partnership. BAE funds New Labour, and the government chose the company as an Education Action Zone partner.

This firm has used threats to jobs in an effort to extract more cash and orders from New Labour.

Shipyard workers who campaigned or voted New Labour on the promise of job security must feel betrayed. John Dolan, the union convenor at the Scotstoun yard, said, “I’m absolutely shocked at the decision, and the mood in the yard is one of disgust.”

He blames New Labour: “They had the opportunity to put shipbuilding back on the Clyde for the next 15 years. I don’t understand why they failed to seize that opportunity.”

Now, for the first time in years, there is again widespread talk of industrial action to save shipbuilding jobs.

At a mass meeting last week in the Scotstoun yard the majority of the shopfloor wanted to down tools and walk out. But union officials talked them out of it. There is talk of a strike ballot if there are compulsory redundancies. But the whole record of union officials shows they will have to be pressured all the way to lead a fight.

The union leaders don’t want to embarrass Labour politicians like Brian Wilson, Helen Liddell and Wendy Alexander who are “working behind the scenes to soften the blow”.

Under a series of employers, Govan workers have been used like pawns in a game of chess. They are never quite sure whether their jobs are safe. Meanwhile they are told to accept poor conditions, speed-ups and low pay as the price of having any sort of job at all.

The future will see more of the same unless there is a fight. Strikes could force the company and the government to withdraw the redundancies and give guarantees about future employment.

But the impetus to get action will have to come from below.

There are plans for a strike vote if compulsory redundancies go through. Marconi’s plant at Poole in Dorset will close with the loss of 570 jobs. In addition 322 jobs will go in Coventry, 164 in Liverpool and a further 50 across various sites in the south east of England.

Another 500 posts will be slashed at locations which are as yet unknown. “We have done everything the company demanded and are now being asked to pay the price for whatever mistakes have been made in the boardroom,” says Margaret Renny, a Marconi worker in Poole.

“I have slogged my guts out for this firm and this is the thanks I get. It will be just impossible to get another job like this round here. I don’t think the government is doing nearly enough to stop these greedy firms. There’s been a lot of fuss in this area about foot and mouth. If you’re a farmer and you lose your livelihood through foot and mouth then you get big compensation. If you’re a worker who loses their livelihood then you’re left to fend for yourself.”

In 1999 Marconi workers were told they had a great future with the company. Each employee was given up to 1,000 free shares, just to show that “everyone was on the same side”.

Each share was then worth 8. The workers could cash them in after three years if the price doubled to 16 a share.

There’s not much danger of that. Briefly the shares did rise-to 12.50 at the highest point. But then they collapsed and last week hit a low of just over 1.

“It was always a con and it is now doubly a con,” says a Liverpool Marconi worker. The share price has collapsed and even if it did hit the target many of us aren’t going to be around to collect the money next year anyway. We’ll be signing on the dole, not arguing about how to spend our bonus. I’m sure the people in the boardroom are angry that their share options have bombed. But they have a hundred ways to make a million. We only have our work.”

THE electronics and computer industries were supposed to be the hope for the future. Now they too are shedding thousands of jobs.

Blair’s fat cats are raking it in

Lord Simpson is the sort of boss New Labour loves.

He was one of the first businessmen put in the House of Lords by Tony Blair. One of the men lined up to be the new head of Marconi is Peter Gershon. He is caught up in the web of government and profit-hungry firms.

Gershon was hired by GEC in 1994 to head its defence electronics division. and then moved to BAE Systems (the firm slashing jobs in Govan).

Just over a year ago he was welcomed into a top civil service post, head of the Office of Government Commerce. This unelected body looks at government purchasing decisions.

I'm proud to be biased in favour of Palestinians 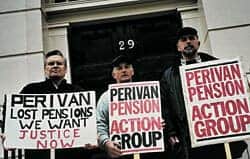 Workers are robbed of pensions as firms fail