Angry march against a plague of flies in Bristol

Around 40 people protested at Bristol docks against a fly infestation and dust problem in the adjacent Avonmouth area last Saturday.

Recycling company Boomeco—which exports rubbish as a biomass fuel—caused the “plague” of flies.

The Environment Agency has now shut down and fumigated its site, but protesters say this has driven more flies into the residential area.

Plans to build a new biomass power station at the docks could lead to more infestations.

It was their third protest in the last few weeks.

Protesters include retired dockers and seafarers who live in the mainly working class area.

Campaigners say they are worried that Bristol mayor George Ferguson’s plans for private sector development at the port could render Avonmouth uninhabitable. 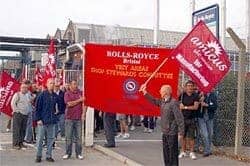 Jerry Hicks was denied official support that could have won reinstatement