This article is over 16 years, 2 months old
Meetings of public sector union members are revealing disquiet with the pensions deal brokered by the TUC which, while preserving the pension age for existing workers, means future entrants will face higher contributions or retiring at 65.
Downloading PDF. Please wait...
Saturday 05 November 2005

Meetings of public sector union members are revealing disquiet with the pensions deal brokered by the TUC which, while preserving the pension age for existing workers, means future entrants will face higher contributions or retiring at 65.

At the start of this week 1.5 million local government workers, initially left out of the deal, were waiting to hear what was proposed for them.

But concern that union leaders had leapt to agree the deal was not confined to council workers.

Karen Reissmann, a delegate to the health service committee of the north west region of the Unison union, told Socialist Worker:

“There were about 30 people at the committee meeting last week and all but two voted for a motion that was very critical of the deal.

“It called for the health service section of the union nationally to give us the right to ballot over whether to accept it.

“I have to say, I was surprised by the strength of feeling. Most delegates there usually back the position taken by the national executive. But the motion was very strongly worded against the deal.

“But I made clear that the threat of action had forced the government to make concessions. The lesson from that is that coordinated action could force a complete climbdown.

“Hands shot up. People weighed in, not to condemn the motion, but to say they were shocked the deal had been agreed to. Many people said it was wrong to condemn future workers to worse pension arrangements.

“If it’s impossible for current staff to work effectively until they are 65, the same is true for people who come after us.

“One speaker stressed that it was wrong to create a two-tier workforce over pensions just when we are involved in major battle to end two-tier pay and conditions in the health service.

“One person, who voted against the motion, said they agreed with the criticisms of the deal, but didn’t believe current workers would take action to ­defend the conditions of future generations.

“Part of the answer to that came from a delegate from Bolton who listed the damage done when unions had not defended that principle in the past. He said there were, of course, no guarantees about people taking action.

“The fact that union leaders have so readily signed up to the deal means it is harder to put an argument for action. But a clear lead can get results. And it is vital that the argument for principle is put.”

Members of the PCS civil service workers’ union in the Left Unity group in London voted last week to reject the pensions deal agreed between the unions and the government.

Many people at the meeting believed this deal has let down future generations of workers who will have to retire later.

In the discussion I made the point that this was not accusing general secretary Mark Serwotka and the rest of the national executive of “selling out”.

They had a difficult decision to make after a number of other unions accepted the deal, but they made the wrong decision.

A national executive member who defended its vote said he had a lot of sympathy for my position, as did the majority of the meeting which voted for the motion. 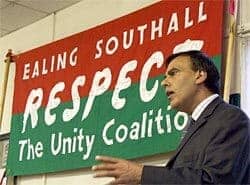 Help Respect do well in Southall

Who's next after Enron?

How did Birmingham man die?