The latest report from the Public Sector Pensions Commissions released last week is neither independent nor factually accurate.

It was sponsored by the usual bunch of rich, pension-smashing thieves at the Institute of Directors (IOD) and Institute of Economic Affairs (IEA).

It is a bosses report designed to divide workers and public opinion by playing on the disgraceful gap between public and private sector pensions.

The figures in the report make for frightening reading and suggest that the country is being bankrupted, not by scurrilous bankers, but by hard working public sector employees. This is a scare tactic deployed with clever financial trickery to sell us this great pensions robbery.

The failure to provide a decent pension for all

The government is hoping to drive public and private sector pensions down. We should be levelling pensions upwards, not downwards.

And the real scandal is that two out of three private sector workers get no employer support towards a pension.

Workers in the public sector continue to provide the foundation for our society—our health, social and welfare needs.

Pensions: Tories and bosses want to rob our retirement 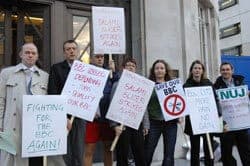 Lecturers must fight attacks on their pensions

Pensions: How much will yours be cut by?