Another ten years of the ‘long war’, says commander of US troops in Iraq

This article is over 14 years, 6 months old
The war in Iraq will last over ten years according to the commander of US troops there, General David Petraeus.
By Simon Assaf
Downloading PDF. Please wait...
Tuesday 10 July 2007

The war in Iraq will last over ten years according to the commander of US troops there, General David Petraeus.

The dire warnings on the “long war” come as three more British troops were killed in Iraq, bringing the total to 159 since the invasion in 2003.

Petraeus told the BBC, “I don’t know whether this will be decades, but the average counter insurgency is somewhere around a nine or a ten year endeavour.”

Plans by George Bush to stabilise the occupation with a “surge” of troops are leading to greater instability.

According to a report issued by the Iraqi Red Crescent Society (IRCS) on 5 July, “the number of displaced people in Iraq is increasing at an average of 80,000 to 100,000 a month”.

The deepening hardship is leading to desperate measures by refugees.

The agency reported that “pregnant women, infants and children are unable to get the required medical care and illegal abortions have become the norm”.

“Without permission to work and with depleted savings, many Iraqis who have fled abroad, accept low paid illegal work. The overall picture is that of a human tragedy unprecedented in Iraq’s history.”

The new figures come as the US announced it will only allow 7,000 Iraqi refugees to settle in the US this year.

Meanwhile the Iraqi government has warned that 140,000 Turkish troops are massing on its northern border.

The Turkish army is threatening to impose an exclusion zone in northern Iraq in its battle with Kurdish rebels of the PKK.

Over 6.5 million Afghans suffer from chronic food shortages, the UN Food and Agriculture Organisation has warned.

The UN said that food shortages are reaching a “critical situation” as over 20 percent of families “do not have access to enough food”.

The dire poverty of ordinary people is in contrast to the $3.5 billion that the US occupation has poured into “high profile” development projects in the capital Kabul such as malls and five star hotels.

British sailors had been spying on Iran

US Democrats vote to fund the war 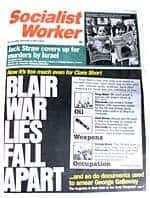 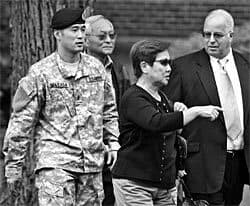