This article is over 11 years, 10 months old
Anti-cuts meetings and protests are taking place across Britain as resistance to the Tories rises:
Downloading PDF. Please wait...
Tuesday 28 September 2010

More than 100 young people took to the streets of Bath on Monday of last week against Bath and North East Somerset council’s plan to close almost all of the youth centres in the area.

They chanted and whistled before tying themselves together and entering the council chamber.

Regional officials from the NUT and GMB union attended along with people from the council’s Unison union branch and the UCU union at City of Bath College.

In a lively discussion, veterans of the anti-poll tax movement explained that we can win.

Young people talked about the lessons they have learned from other campaigns.

A collection was made and tickets were sold for the coach from Bath to go to the protest at the Tory conference on Sunday.

The alliance is open to anyone who wants to take part, whether from a union, political party, community organisation, or no group at all.

Users of both services spoke eloquently and movingly of how their lives have been improved by the educational, recreational and vocational opportunities they provide.

The 14-year old daughter of one physically disabled woman spoke of how her mother had been depressed until she was referred to the Albert Dane Centre last year.

Staff, who are represented by the Unison union, also spoke of their love for the work.

Representatives of Ealing NUT and Ealing trades council attended and gave messages of support. Many speakers expressed anger at how the newly-elected Labour council claims to be protecting frontline services while attacking the most vulnerable.

No councillor attended the meeting despite invitations.

The meeting set up an action committee for the Save Our Day Centres group and agreed to lobby the council meeting on 9 November when the final decision on closure will be taken.

Support was also shown for the Right to Work demonstration this Sunday and several people bought tickets for the coach.

The Lib Dem council privatised the service three years ago but now 180 jobs are at threat as Connaught has gone bust.

The demonstration was angry and lively as the workers demanded that the council take them back in-house.

Many people showed support for the fight.

Meanwhile, the unions have further talks planned with the council to try and reach an agreement. 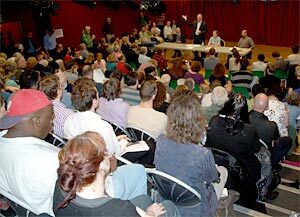 People meet to stop the rich robbing the poor