This article is over 16 years, 6 months old
Holocaust Survivor Leon Greenman movingly outlined the threat of fascism on Monday of this week as activists geared up to protest against the Nazi British National Party (BNP) in Leeds.
By Christian Hogsbjerg
Downloading PDF. Please wait...
Saturday 05 November 2005

Holocaust Survivor Leon Greenman movingly outlined the threat of fascism on Monday of this week as activists geared up to protest against the Nazi British National Party (BNP) in Leeds.

Students at Leeds University gave him a standing ovation after hearing him speak.

Leon spoke alongside speakers from Unite Against Fascism and the Unison and GMB trade unions at a meeting to raise awareness of the BNP’s threat.

Leon Greenman was born in England in 1910 but ended up a witness to Nazi death camps across Europe from 1942 to 1945. His wife and son perished in Auschwitz.

“I want to give you an idea of what could happen if you vote for the BNP,” he told the meeting. “In mind and body, you would become a prisoner like I was.”

As Leon Greenman spoke, anti-fascists from across the country were preparing to mobilise against the Nazis outside Leeds Crown Court on Wednesday of this week.

The BNP’s leader Nick Griffin was due to appear in court that day to face charges of inciting racial hatred.

These charges stem from the BBC’s Secret Agent documentary, which exposed the race hatred and thuggery at the heart of the BNP.

Unite Against Fascism and Yorkshire and the Humber TUC have organised the morning protest against the BNP, followed by an anti-fascist rally outside Leeds Art Gallery.

“NASUWT is participating in this demonstration because there is growing evidence that members of the BNP and other similar organisations are using membership of trade unions and public sector professions to provide a cloak of respectability for their activities.

“Those who support racist and fascist agendas must be exposed and opposed. The demonstration tomorrow will provide the opportunity to do just that.”

The BNP had planned a national demonstration in Keighley, West Yorkshire, on Saturday of this week.

But they were forced to cancel their plans when the home office signed a banning order on Friday of last week preventing them from meeting.

Weyman Bennett of Unite Against Fascism stressed that it was the threat of a large anti-BNP protest that prompted the police to act against the Nazis.

Weyman said, “The chief constable of Yorkshire rung us up and he asked if we were mobilising for the Keighley demonstration. I said yes — we’re going to mobilise as much as possible. And he said, if you are mobilising, they are not marching.

“The BNP has been beaten every time — providing we mobilise and make sure our voices are heard. They are attacking all of us — but we are in a position to unite and defeat them.”

Socialist Worker will publish a report on Wednesday’s activities against the BNP on this website later in the week. 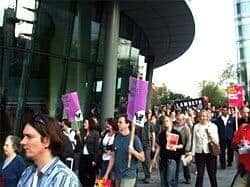