Last Saturday afternoon began like any other in Birmingham’s Victoria Street.

Local people were making their way to the shops. Kids were playing on a pretend beach while their older brothers and sisters gazed at a fighter jet, part of an air force display.

But it was not an ordinary Saturday afternoon – the anti-Muslim English Defence League (EDL) was threatening to march through the city.

The police had said that the EDL was not going to be allowed anywhere near the city centre.

But the Socialist Workers Party (SWP) and some local youth groups decided to call a counter-demonstration and celebrate multi-racial Birmingham, just in case the EDL tried to march.

At about 2.30pm a group of 30 SWP supporters and young Asian people met to set up the counter protest, which was due to start half an hour later.

Within minutes over 100 EDL marchers, escorted by four or five police officers, marched straight towards it. They were chanting “Muslims out” and carrying banners saying “No more mosques”.

The EDL tries to claim it has no links with the Nazi British National Party (BNP).

Yet well-known BNP supporters were seen on the EDL protest and one of the EDL’s key organisers, Chris Renton, is a leading BNP activist from Weston-super-Mare.

One of their thugs in Birmingham on Saturday was wearing a T-shirt emblazoned with the words “Zyklon B”, the name of the gas that was used in Nazi death camps to murder millions of Jews during the Holocaust.

The EDL tried to march down the high street, abusing passers by and throwing bottles at the Asian youths.

A series of running protests and skirmishes with the EDL followed. By 3pm between 400 and 500 anti-racist protesters had gathered in two parts of the city centre. They chanted “Black, white, Asian and Jew – there are more of us than you” and “Nazi scum out of Brum”.

The protesters kept the EDL thugs pinned behind police lines and locked inside a pub for over two hours.

Eventually the police rounded up the racists and put them on two “special buses”.

They allowed one bus to drive to Lancaster Circus, over a mile from the city centre, where the EDL held a rally in an underground subway.

The other bus was literally sent to Coventry.

We don’t usually quote racists in Socialist Worker, but on this occasion we will make an exception.

One EDL supporter posted on a website noticeboard: “We were kept on that bus for over five hours. We were then released at half one in the morning – no buses, no trains – and we had to wait five hours in the freezing cold for the first train out of Coventry.”

And over 70 of them were charged and fined £80 each for smashing up the bus.

Since the protest the EDL has said that its supporters will not march in Birmingham again because the “police will not protect them”.

Saturday was a major victory for anti-fascists. But the EDL will try to make a comeback.

It has already announced plans to protest against a mosque in Harrow and for another demonstration in Luton.

But the experience in Birmingham shows the best way to beat them.

Brent & Harrow Unite Against Fascism has called a solidarity vigil to defend the Harrow mosque from racists and fascists. It starts at 1.30pm on Friday 11 September and will continue until the early evening, including a rally and speakers at 6pm. 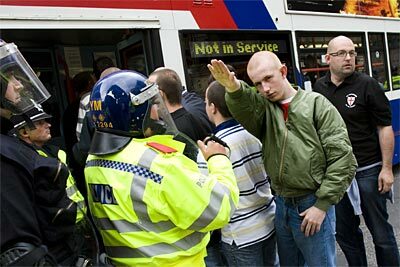 Who are the EDL marchers?