Thousands of people “took the knee” to protest against racism and remember George Floyd, at events across Britain organised by Stand Up To Racism on Wednesday.

There was a fantastic turnout at protests across Greater Manchester. People took the knee in the middle of the road outside Manchester University, stopping traffic. In Prestwich, shops shut early to make way for hundreds of people to take the knee in a car park.

There were hundreds of people at Four Banks in Chorlton and in Levenshulme.

There were five actions across Glasgow in terrible rain. The largest was attended by about 70 people.

And there were also actions in Edinburgh, Stirling, Paisley, Hamilton, Coatbridge and the Isle of Jura.

At least two events took place in Birmingham—one in Handsworth and another in Bearwood.

Francesca organised a protest in Crouch End because, “It was a powerful opportunity to bring a global issue to a local level,” she told Socialist Worker.

“Me and my friends did it last week but we wanted to do it publicly—it was received really well and passers-by joined in.

“Now we’ve gone from four people to 80 in a week—there’s power in numbers, that’s powerful in itself, it was incredibly emotional.”

“The fact there’s so many protests is a sign of anger around Covid-19 and outrage at what happened to George Floyd,” argued Gary, who joined a protest on Jansons Road.

“People can see there’s something in the air, that literally tens of thousands of people mobilised and statues are getting toppled. It adds to the feeling that people power isn’t just something that happens over there, it very much happens here,” he said.

In Barking and Dagenham, east London, around 300 protesters rallied on Tuesday afternoon to listen to speeches and music performances.

Around 100 people gathered in Stratford Park in east London. Protester Gloria pointed out how she thought little had changed since the Windrush generation came to Britain

“I came to Britain when I was 13, over 50 years ago, and worked in the NHS. I didn’t expect my children to face the same racist crap as I have,” she said.

Wendy spoke of her anger towards Boris Johnson after he said that Britain isn’t a racist country.

“When our prime minister is saying that this country isn’t racist he is disputing the facts. We would be in a better place if we were listened to,” she told Socialist Worker.

“This movement has to continue because the government just isn’t listening.”

Over 250 people gathered in Windrush Square in Brixton, south London. Those gathered heard from Stand Up To Racism’s Brian Richardson who told protesters that “the UK is not innocent” when it comes to instances of police brutality.

He read just some of the names of those who died in the hands of British police especially marking the name of Sean Rigg who died in Brixton police station.

The crowd chanted “Black Lives Matter” and “No Justice No Peace” led by Black Lives Matter activist Cosmos Cupid. The crowd fell silent for one minute at 6pm with raised fists against racism here and around the world.

In Tower Hamlets, east London around 70 protesters took the knee for eight minutes and 46 seconds. School students, students, trade unionists and local campaigners vowed to keep toppling slave-owners’ statues and organising until Tower Hamlets is a free from racism.

Hundreds of people gathered outside Hackney town hall in east London. It was the third such large protest in a week.

There were two events in Waltham Forest, east London, of 100 and 200 each. Former Labour Party leader Jeremy Corbyn spoke at an event at Muslim Welfare House in Finsbury Park, Islington.

Some 300 people turned up to central York to take the knee for  minutes 46 seconds—socially distanced, placards in hand and chanting loudly.

People also took the knee for the same length of time in Rotherham, south Yorkshire, where the names of black people killed by cops in Britain were read out.

Some 150—mostly young—people formed a socially distanced line from Lancaster’s slavery memorial round on to the one way system. At 6pm they took the knee and held a minute’s silence.

It was agreed to do the same next week and announce it in advance to see if we can surround the city.

In Bristol, some 45 people lined the road along Ashley Down Hill to take the knee, 60 people on Horfield Common, and another 40 people on the Lockleaze estate.

In west Wales, 80 people protested in Haverfordwest, where a blue plaque to Thomas Picton, governor of Trinidad from 1797–1803 and child torturer, was removed. There were another ten protesting at a monument to Picton in Carmarthen. Elsewhere in Wales, people protested in Cardiff, Lampeter, Pembroke Dock, St David’s and Llanelli.

In Bishops Stortford activists “renamed” the Rhodes Centre—named after imperialist Cecil Rhodes—to the Felix Cobson Arts Complex. He was a local arts educator from Ghana who taught young people about African history culture, history and art, music and dance.

Earlier in the day, some trade unionists had organised actions in their workplaces—including at Islington council and Tower Hamlets health workers. In Oxford there were actions by postal workers at Royal Mail House, and by health workers outside Warneford hospital.

Thanks to everyone who sent reports and pictures
Topics Black Lives matter, George Floyd, Stand Up to Racism 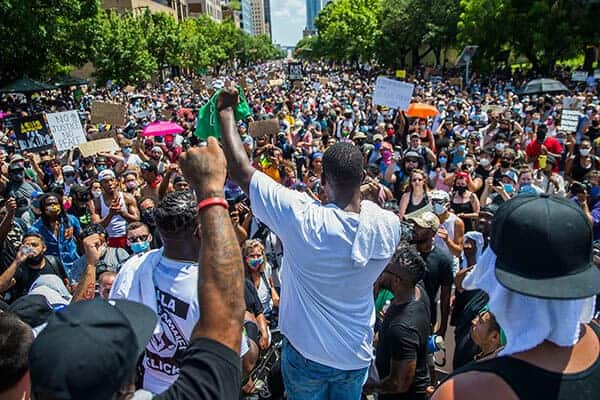 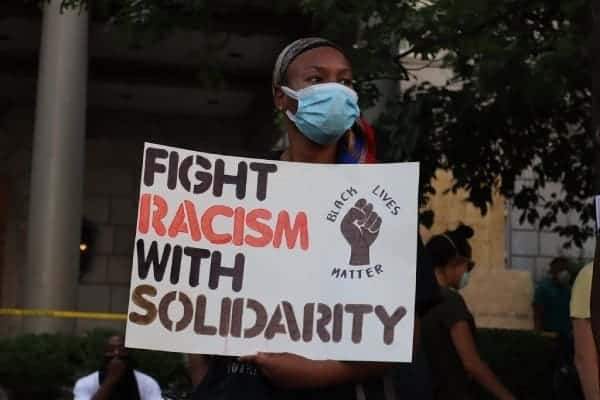 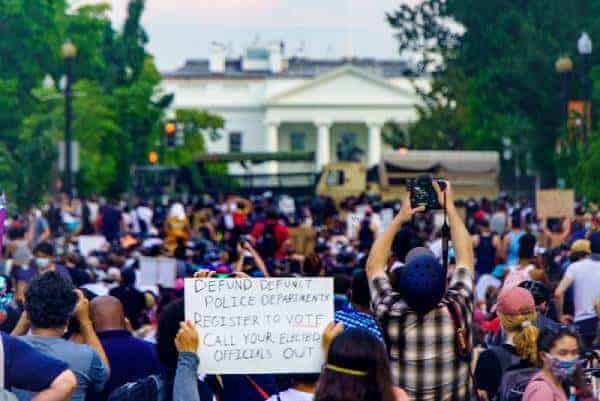 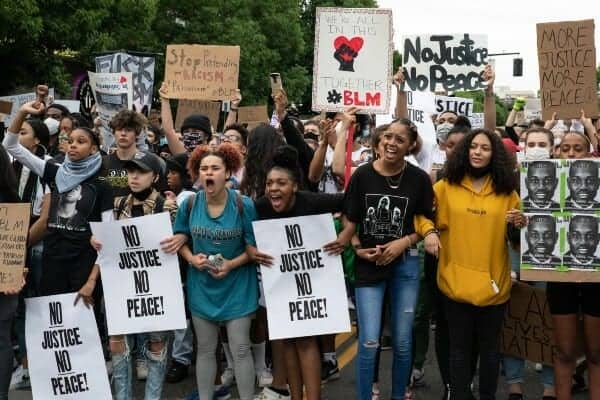