This article is over 14 years, 3 months old
Thousands of campaigners from across Britain defied a threatened ban to join the vibrant Stop the War demonstration to parliament on Monday of this week. Chris Bambery reports from the protest
Downloading PDF. Please wait...
Tuesday 09 October 2007

“This has been a bad couple of days for Gordon Brown,” quipped a pensioner as he stepped out down Whitehall from Trafalgar Square.

He was heading up a march which up until only an hour before had been declared illegal.

Police and the parliamentary authorities had issued a ban on Stop the War protesters marching to parliament on Monday, the day parliament reconvened to hear Brown make a statement on the British presence in Iraq.

Then, just half an hour before the rally in Trafalgar Square got underway, police officers approached the organisers to say they could go ahead.

As the news spread there was a sense of elation, pride and determination in the 5,000 strong crowd.

“The police backed down because of the size of the turn out,” was the verdict of Declan James Metcalfe, a student from Solihull College who’d joined a 30 strong delegation from Birmingham.

There was widespread disgust that the government could lavish praise on pro-democracy demonstrators in Burma and at the same time try to ban people protesting outside the “mother of parliaments”.

The big turn out of students on the march demonstrated Stop the War’s success in establishing itself on campus this year. Two hundred and fifty students joined a feeder march from the School of Oriental and African Studies in central London.

Alexandria Szyellowski had travelled from Warwick university because she felt it important “to exercise democracy”. She said there was an active Stop the War group at the university.

Birmingham university student Rachel Hudd chipped in to say she’d come to protest at the police ban. She added that she felt that students needed to build a Stop the War group at her college.

Matthew Vickery had come from Sheffield Hallam University where a Stop the War group has just been launched. “This is the first thing we’ve done as a group. Ten students have come down. People were furious when they found out the march had been banned.”

Simon Keble from Swansea university slated the hypocrisy of Gordon Brown “who tells us we have the right to protest and then tries to ban this demonstration.”

“Everyone has the right to protest,” he added. “Our dissent shows the government we won’t back down.”

There was also a sizable number of pensioners, trade unionists and peace activists on the march.

Edmund Quinn is an 83 pensioner from Coventry who served in Bomber Command in the Second World War. He explained why he was there, saying, “I consider it my duty to protest. I was in the war – the politicians haven’t learnt anything from that.”

Colin from Potters Bar was one of a number of striking postal workers at the front of the march.

He’d joined the protest after a strike rally in nearby Westminster Central Hall. Colin told Socialist Worker, “I’ve supported this movement from the start, coming on national and local protests.”

When asked about Gordon Brown he smiled saying, “He wasn’t my choice.”

“That’s not bad on a working day,” Pete explained. “It shows the support is still there.”

Among the Norwich group was an international student from Grenoble, Ilheme Yasmine.

She said it was her first anti-war protest but that she had been on the school student and worker protests over job security which rocked France last year. 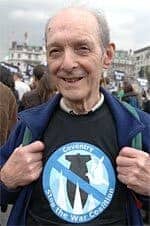