This article is over 20 years, 9 months old
'Government ministers were surprised by the size of the anti-war demonstration in London on Saturday.'
Downloading PDF. Please wait...
Saturday 20 October 2001

‘Government ministers were surprised by the size of the anti-war demonstration in London on Saturday.’

THE REVOLT against Bush and Blair’s war took off seriously in Britain on Saturday.

Around 50,000 people marched in London on a furious, vibrant, energetic, united, young and old, black and white response to the murder in Afghanistan.

The scale, breadth and energy of the march showed we can build a wave of resistance that can stop this war.

The demonstration brought together older peace campaigners and thousands of new protesters inspired by the global anti-capitalist movement.

There was a flavour of the massive protests that took place in Genoa in July on the streets of London on Saturday.

Sixteen year old Jill Cook had came with other school students from south London. ‘I’m angry and shocked that Tony Blair can pretend that he cares about people across the world when bombs are murdering Afghans,’ she said. ‘Blair and Bush are not interested in justice. They are interested in money and power.’

Riaz Ali told Socialist Worker, ‘I have come down with friends from the mosque in Birmingham. When the missiles started to fall on ordinary people in Afghanistan I knew we had to be here. I do not care if people are Muslim or not. If they are prepared to fight to stop this war then they are my brothers and sisters.’

The people marching knew about the crimes of Bush and Blair. They knew the arguments against the war.

The BBC reported, ‘Ascending the escalator at Marble Arch tube station, the air was buzzing with informed and impassioned discussion.’

At the same time as the London protest, around 4,500 people gathered against the war in Glasgow’s George Square. This was Scotland’s biggest anti-imperialist protest since the Vietnam War.

In these four pages we print the pictures and reports that destroy the myth that only a tiny minority oppose the attacks on Afghanistan. 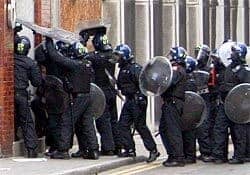 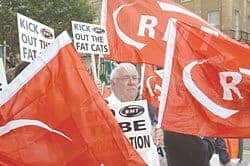 Campaigners step up fight to gain justice for Ian Tomlinson