This article is over 13 years, 7 months old
Some 200 workers at the Appledore shipyard in north Devon struck on Friday of last week and Monday of this week over pay.
Downloading PDF. Please wait...
Tuesday 11 November 2008

Some 200 workers at the Appledore shipyard in north Devon struck on Friday of last week and Monday of this week over pay.

The workers, members of the GMB and Unite unions, say they feel like “poor relations” compared to colleagues working at Devonport Dockyard in Plymouth. The Babcock company owns both yards.

Michael, a striker, said, “We have a fantastically skilled workforce here in Appledore. But other people working for the same company and doing the same job are earning between £60 and £80 more a week.

“This has not just sprung up overnight. It has been festering for four years and it is unfortunate that it has come to a head in the current economic climate.”

Stuart Fegan, a GMB organiser, said the strike had 100 percent support. He said, “This sends a clear message to Babcock. It is a multi-million pound company.”

Union reps went to London to seek the support of the Confederation of Shipbuilding and Engineering Unions last week. The umbrella

organisation for the unions agreed to make contact with Babcock, inviting the yard owners to more discussions.

Hundreds of workers are to lose their jobs at Devonport Dockyard in Plymouth.

Babcock Marine says that up to 300 jobs are to go as part of its plans. 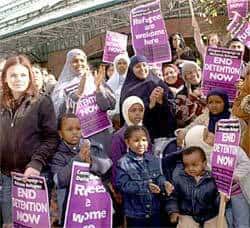