It was the first of four planned days of action by the workers, who are members of the Unite union. They are fighting against attempts to attack their pension scheme.

Shop steward John Hubble was on the picket line in Basildon, Essex. “Argos seem to think they can just do away with our final salary pension scheme,” he told Socialist Worker.

“There’s been a strong feeling of support for the strike. This is a cash rich company, and it’s still making a profit.”

In Heywood near Oldham around 50 people joined a lively picket line this morning. Workers also struck in Magna Park in Leicestershire, Bridgwater in Somerset and Castleford in West Yorkshire.

Despite a fall in profits in the past year, Argos still found the money to pay chief executive Terry Duddy £1.1 million last year. His pension fund is worth over £4 million.

But workers are being moved from a final salary scheme to one linked to share prices. That could see some workers tens of thousands of pounds worse off.

The company has also refused to negotiate through the Acas conciliation service. Even the right wing Daily Mail newspaper says workers are being “hounded” into “shoddier” pensions. 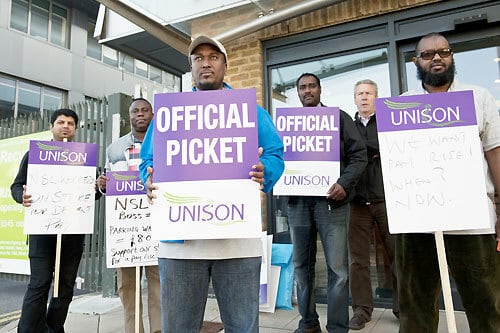