The Unite union members have not had a pay rise in two years and want a 2.5 percent wage increase The strike is not just about money but also against bullying bosses.

One driver told Socialist Worker, “If you even forget to sign your check sheet or touch your mirror against something, you get a caution. If you get three cautions in two years, they sack you.”

Another driver added, “Everything is made out to be our fault. If there’s an accident, even if the police say the driver was not at fault we still get punished. We’re never at ease. We work with fear at the back of our minds. We need to strike until they give us something acceptable.”

One driver pointed out that it takes seven years to be paid the experienced driver rate, adding “I’ve been driving for eight years and I earned more then than I do now. We’re taking a stand, but there’s no point in doing it just once—we’ll have to strike again.”

The 24 hour strike by bus workers affected Arriva garages across north London. It was sparked by a decision by Arriva to refuse workers a pay rise this year—despite bumper profits.

Ozzie, the Unite rep at the garage, told Socialist Worker, “The offer we’ve been made is ridiculous. What we’re asking for—£1,500 lump sum plus 2 percent backdated to April—is just crumbs from their £8 million profits.

“New drivers are on different grades. They are just trying to divide us. They behave as if it’s military service we’re being asked to do.”

Thanks to Gareth Jenkins 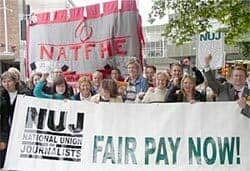 A little bit extra would help at Asda depot