Junior doctors will strike three times next month if they back industrial action in a ballot ending on Wednesday of this week.

The British Medical Association (BMA) said its members would only provide “emergency care” on 1 December, with “full withdrawals of labour” on 8 and 16 December.

Up to 500 junior doctors and supporters protested in Birmingham last Sunday.

Everyone needs to get behind their dispute.

Yannis Gourtsoyannis sits on the BMA’s junior doctors’ committee. He told Socialist Worker, “If you’re a union member, send a message of support and get in touch with your local BMA branch. 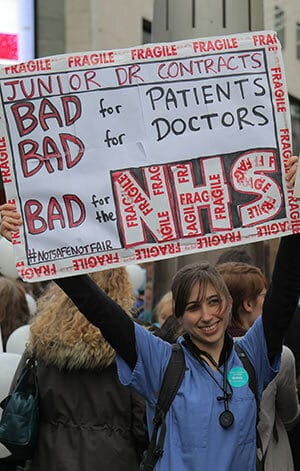 Jeremy Hunt’s attack on junior doctors is bad for us all (Pic: Paul Stringer)

“In the longer run, put pressure on your own union to come out in support of us.”

Petra Hanson, who was on the Birmingham protest, said, “It’s really bad for patients.

“They will have doctors who are tired or want to leave medicine, which will leave the NHS in a bad position.

“We want to work safe hours and provide the best patient care.”

The dispute is part of the fight to defend the NHS and support is growing.

“We’ve been petitioning and making signs in support of the junior doctors—there’s been a lot of support.”

Doctors in east London are planning to hold a meeting on 23 November to build support for the walkouts.

Rory Hicks from Manchester told Socialist Worker, “We’re planning a demo the Saturday before the strike. I think we’d get 10,000 onto the streets.”

Other unions need to ballot and join the junior doctors.

Thanks to Taz Ali

Tories forced to bail out hospitals because of cuts and privatisation 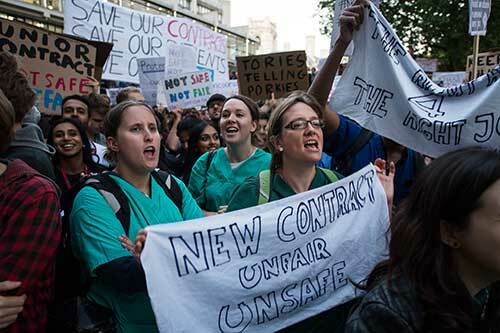