This article is over 11 years, 7 months old
This year began with brutal new attacks that will hit every working person—the VAT rise, travel fares up, food prices up, fuel prices up, rents up and higher mortgage payments to come.
Downloading PDF. Please wait...
Tuesday 04 January 2011

This year began with brutal new attacks that will hit every working person—the VAT rise, travel fares up, food prices up, fuel prices up, rents up and higher mortgage payments to come.

All this comes on top of shattering public service cuts, a jobs massacre and pay curbs for millions.

Yet at the same time City analysts are predicting that the five biggest banks will make profits of £52 billion in 2011—£1 billion a week!

And the financial fat cats are set to collect £7 billion in bonuses.

It underlines how pathetic the government’s bank levy announced this week really is.

It will be set at 0.05 percent on a portion of their assets and will eventually, ministers claim, raise up to £2.5 billion a year.

The bankers made that much profit over the Christmas holidays.

The coalition’s assaults are not “inevitable”. They are a political choice decided by a government that puts profit before people.

The wealth held by the bankers and big business should be used for the NHS and education and to create jobs—not hoarded by the parasites who triggered the crisis.

If David Cameron and his acolytes get their way this will be a horrendous year for workers. The only way to prevent that is to make it a year of fightback and resistance.

The students last year showed the way to do it. We need strikes, protests and campaigns that embrace millions in 2011. 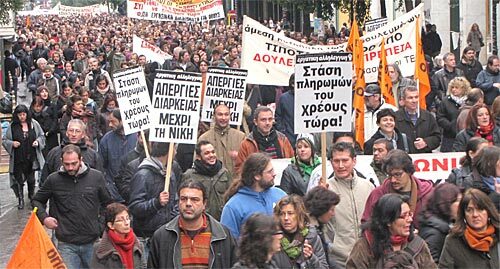