This article is over 15 years, 8 months old
University lecturers met in Scarborough last week for the last time prior to the merging of the AUT and Natfhe lecturers’ unions to form the Union of Colleges and Universities (UCU).
By Malcolm Povey, Leeds AUT (personal capacity) and Hanif Leylabi, student
Downloading PDF. Please wait...
Saturday 20 May 2006

University lecturers met in Scarborough last week for the last time prior to the merging of the AUT and Natfhe lecturers’ unions to form the Union of Colleges and Universities (UCU).

The new union, to be founded in June, will represent over 60,000 staff and will be the largest union in the tertiary education sector in the world.

Last week’s conference was one of the largest in the union’s history with over 200 delegates and a total of nearly 300 people attending.

It took place in the context of a bitter industrial dispute with pay docking, lockouts, bullying and intimidation by management.

Both employers and the union are in unexplored territory. One of the effects of management’s intransigence is a permanent alienation of their staff.

The employers made an insulting offer of 12.5 percent over three years last week, which the conference rejected in an unprecedented unanimous show of unity.

Officials expected further offers to be made during conference, but none came. The employers believed we would cave in.

Every escalation by the employers has been met by escalation on our side, so we voted for escalation of action short of a strike to all staff groups and for “demonstrable national action”.

Another effect of the dispute has been a dramatic shift leftwards in the union. The conference voted to affiliate to Stop the War.

The unions have proposed a national demonstration at Northumbria university on 1 June. We need the biggest mobilisation of staff and students possible.

We need to turn any demonstration called into a national strike in defence of higher education involving all staff and all students.

Student support for our dispute is vital. A number of student unions are opposing our action. But most students recognise that the future of higher education is at stake, that we deserve decent pay and that this is in the interest of students.

We want an education system properly funded and open to all, not the elitist system for those who can afford it coupled with a cheap system of poor quality education for the majority.

We need to spread the action nationally. 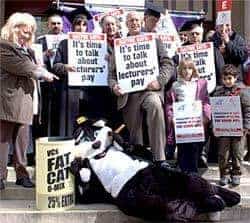