The group got the gong for its ongoing campaign to win justice for the innocent building workers caught up in the blacklisting scandals.

Some 44 firms were exposed for having operated a covert database containing the details of over 3,200 workers.

The vast majority were put on the list because of their trade union membership or because they had raised concerns about safety issues. 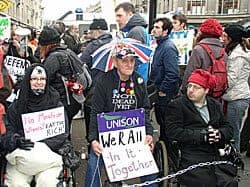 Video of the demonstration in London, 24 February