BA says the workers have been “intimidating” strike breakers. But the intimidation is coming from BA.

Bassa, the cabin crew section of the Unite union, says, “Anonymous ‘heavies’ arrived at our branch secretary’s door late at night delivering 47 pages of legal threats in an attempt to force Unite to reveal the names of a further 32 people who post on the Bassa forum.”

A number of Bassa reps are among those facing gross misconduct charges and more reps are threatened with them.

Bassa says that hundreds of cabin crew have contacted the union, worried that they could be suspended.

“Our phones are ringing non-stop,” said Ken Abard from Bassa. “BA are doing all they can to try and intimidate staff.”

BA demanded that one woman attend a disciplinary hearing, despite the fact that she was pregnant and off work sick.

The ruthless approach of BA bosses reflects their knowledge that cabin crew are likely to deliver a massive vote for strike action next week.

Cabin crew are balloting for action over job cuts. BA wants to create a two-tier workforce by bringing in a new fleet on worse conditions and lower pay.

It is hellbent on smashing the union to ram through cuts.

Cabin crew are standing up to Willie Walsh, one of the most ruthless bosses in Britain.

They have delivered massive votes for action in the past and remain determined to fight.

One worker on the Bassa website calls it “the worst kind of harassment, bullying and victimisation that I have experienced in a very long career.

“It has demonstrated how we can expect to be treated in a world without a strong and effective trade union,” they write.

“My feeling is that this will work against them. I have had crew tell me that even had they disagreed with Unite, they would have voted yes in response to the threatening management style.

“They believe they can frighten cabin crew into voting no. THEY ARE WRONG. Stay strong and we will win!”

Now the Unite union must throw its national weight behind the cabin crew.

If a yes vote is announced next Thursday, the union should call a militant programme of action that can win.

The ballot ends on Monday of next week and the result is due on Thursday. Watch this site for updates.

A bloody war in Afghanistan, thousands of lives lost, what have we gained? 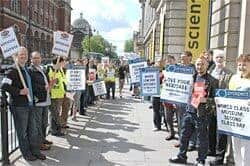