This article is over 11 years, 0 months old
British Airways cabin crew have voted by a fantastic 78.5 percent for strikes on a 75 percent turnout.
Downloading PDF. Please wait...
Friday 21 January 2011

British Airways cabin crew have voted by a fantastic 78.5 percent for strikes on a 75 percent turnout.

This is an even bigger vote than in the workers’ last ballot. Their Unite union must name the dates now and launch a militant programme of action that can win.

BA’s ultimate aim is to destroy the union—that’s why this battle matters for the whole trade union movement.

Cabin crew can beat their bosses. They’ve shown fantastic strength and determination throughout the dispute, taking 22 days of strikes and winning huge support from other workers.

Newly elected general secretary, Len McCluskey, has promised his “100 percent support” for cabin crew. He has told crew, “I will not let you down. I will make certain that whatever you want, you will get.”

Today McCluskey said, “Surely BA management must now wake up and listen to the voice of its skilled and dedicated employees. This dispute will be resolved by negotiation not litigation or confrontation.”

BA management have repeatedly shown themselves to be determined to break the militancy and organisation of cabin crew. It will be hard-hitting strikes that will make BA bosses listen.

Crew should pile the pressure to demand that McCluskey calls a programme of strikes and throws the whole weight of the union behind the dispute.

Battle is on for the future of Unite 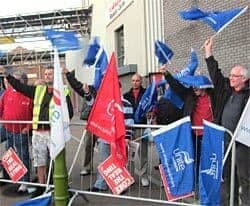