This article is over 17 years, 3 months old
Babar Ahmad, the south London IT worker threatened with extradition to the US on "terrorism" charges, could face indefinite military detention if the extradition goes ahead, according to his lawyers.
By Anindya Bhattacharyya
Downloading PDF. Please wait...
Saturday 12 March 2005

Babar Ahmad, the south London IT worker threatened with extradition to the US on “terrorism” charges, could face indefinite military detention if the extradition goes ahead, according to his lawyers.

The claim was made by Thomas Loflin, an expert witness called in by the defence team. Loflin, a US civil rights lawyer, was speaking at Babar’s extradition hearing in London on Wednesday and Thursday of last week. Loflin told the court that there was a “real risk” that Babar could face “Guantanamo or worse” if he was delivered over to US authorities.

The prosecution reacted to Loflin’s testimony by asking for the hearing to be adjourned while they considered how best to respond to it. “We do not concede at this juncture that a transfer to military jurisdiction would constitute a flagrant denial [of Babar’s rights], but we do accept that it is strongly arguable,” said John Hardy, representing the US government.

The judge, Timothy Workman, granted the request for an adjournment. Babar’s hearing will now resume on Monday 18 April at 10am in Bow Street magistrates court, central London.

In his evidence, Loflin cited previous cases where people indicted in civilian courts had been declared “enemy combatants” and whisked away into military custody, often at the dead of night without their lawyers being informed.

Under US laws brought in after 9/11, those suspected of terrorism offences can be transferred to military custody on the orders of US president George Bush.

They can then be detained indefinitely, tried by military commission with no right of appeal, and even subjected to the death penalty. Secret evidence, including evidence obtained by torture, can be used against them.

Terrorism suspects can also have “special administrative measures” placed upon them, such as indefinite solitary confinement and restrictions on their access to lawyers. Moreover, military detainees need not even be held on US soil.

They can be shipped off to Guantanamo Bay, or face “extraordinary rendition” to secret torture camps in Egypt, Morocco, Saudi Arabia and Jordan.

According to reports in the New York Times last Sunday, the CIA has transferred between 100 and 150 terror suspects to foreign prisons since “rendition” rules were relaxed in the wake of 9/11.

Prosecution lawyers, who represented the US government, argued that it would be illegal to transfer an extradited suspect to military jurisdiction. “I think president Bush would disagree,” replied Loflin.

“Nowhere in this treaty does it say that once a person is extradited he must be detained under civilian judicial authority or that the trial will have to be in a civilian court.” Babar was taken into custody in August last year and is currently being held in Woodhill prison.

The allegations made against him by US authorities are all offences under British law, yet he has not been charged in this country. Part of the legal argument at Babar’s extradition hearing concerned the definition of “terrorism”. At one point prosecuting lawyers suggested that terrorism meant “violence for political ends”.

“President Bush is continually engaging in violence for political ends,” replied Edward Fitzgerald, Babar’s defence barrister. “Does that mean anyone who sends him a donation is supporting terrorism?”

For more on the US’s secret “extraordinary renditions” programme, read Outsourcing Torture by Jane Mayer in the 14 February issue of The New Yorker. 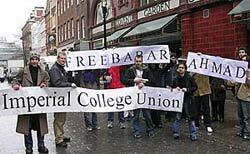