Back anti-war activists in Egypt

This article is over 18 years, 4 months old
A DEMONSTRATION was taking place this week in defence of Egyptian anti-war activists. It is scheduled for Friday 12 September from 5pm to 6.30pm outside the Egyptian embassy at 26 South Street, London W1 (nearest tube Green Park).
Downloading PDF. Please wait...
Saturday 13 September 2003

A DEMONSTRATION was taking place this week in defence of Egyptian anti-war activists. It is scheduled for Friday 12 September from 5pm to 6.30pm outside the Egyptian embassy at 26 South Street, London W1 (nearest tube Green Park).

The Egyptian state has jailed five activists and is threatening them with 15 year prison sentences. Jeremy Corbyn MP said he would be at the demo.

WORKERS AT the Rhodia chemical plants have suspended strikes over pensions after the company produced a new offer. GMB and Amicus union members at the Oldbury plant in the West Midlands had voted for a 24-hour strike as the latest phase of their campaign against the company’s decision to close its pension scheme to new workers.

Many workers feared this would lead to attacks on the scheme for existing workers. Talks last week saw management offer a guarantee that the scheme will remain open to current members until 2012. But the scheme will still be closed to new members. Some Rhodia workers believe that this offer does not go far enough.

Tests campaign gears up for fight

THE STEERING committee of the Anti-SATs Alliance met last Saturday to discuss its support for the NUT union’s campaign against school tests. The NUT has sent its members a booklet arguing against the tests and a survey asking for members’ views.

The committee agreed to circulate model answers to the survey questions. There was discussion of the need to campaign among parents and governors. JANE BASSETT, anti-SATs Alliance steering committee (personal capacity)

TRADE UNIONISTS and Labour Party members gathered at Burston, near Diss in Norfolk, last Saturday to remember what is sometimes called the longest strike in history. The rally has been held annually since 1983, and celebrates a boycott of the church school in the village near Diss, that began in 1914 and lasted for 25 years.

Pupils walked out in protest after teachers Annie and Tom Higdon were sacked for helping local farm workers establish a union, and went to a rival strike school run by the couple.

Guest speakers at the rally included Labour MP John Cryer. He said, ‘We live in a time when the traditional values of the labour movement are more important than ever. People are facing all sorts of problems because of the changes in working practices, the activities of big companies, cutbacks and all the rest. ‘Labour is not doing enough to support the trade unions.’,br> 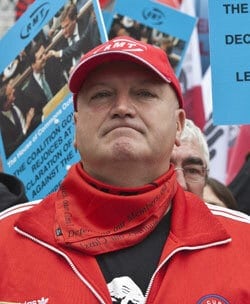 Mixed reception for Miliband, but calls for strikes win applause 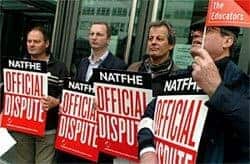