This article is over 9 years, 11 months old
The government's bailout fund for hospitals is straining under the weight of private finance debts
Downloading PDF. Please wait...
Tuesday 07 February 2012

The government has created a £1.5 billion bailout fund for hospitals straining under the weight of private finance debts.

As with any bailout, this is money earmarked for the private creditors—not for saving the hospitals.

But it shows up the scandal of PFI, which sees private developers lend money for new buildings—but grab billions of pounds of interest in return.

North Cumbria hospital trust is expected to use the bailout fund, despite already making £15 million in cuts and freezing workers’ pay.

It will be taken over by Northumbria Foundation Trust, creating a new trust spanning the width of England.

There are fears that post‑merger cuts will lead to patients having to cross the Pennines for specialist treatments.

Other hospitals expected to need the bailout include St Helens and Knowsley NHS Trust in Merseyside, which faces a £42.5 million bill for PFI debts this year alone.

PFI-type schemes began in the 1990s under John Major’s Tories. They were then extended and expanded by New Labour.

Major banks and construction firms are among those who profit most from PFI. 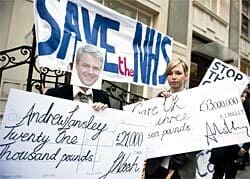 Meet the fat cats who want to rob the NHS

New GPs’ group comes out against the health bill