Bain declares war on the firefighters

This article is over 19 years, 1 months old
BREAKING national conditions and fire cover standards. A \"pay as you go\" fire service. That's what the 160 pages of the Bain review into the fire service, published this week, amounts to. Talks between fire service employers and the Fire Brigades Union (FBU) are scheduled for early January. But Prescott says he will impose Bain's assault anyway.
By Kevin Ovenden
Downloading PDF. Please wait...
Saturday 21 December 2002

BREAKING national conditions and fire cover standards. A ‘pay as you go’ fire service. That’s what the 160 pages of the Bain review into the fire service, published this week, amounts to. Talks between fire service employers and the Fire Brigades Union (FBU) are scheduled for early January. But Prescott says he will impose Bain’s assault anyway.

Bain’s proposals make a resumption of the dispute and strikes at the end of January more likely. ‘The line is clear,’ says Dick Duane from Basildon station in Essex. ‘The union has suspended strike after strike, yet what we get in return is this. We were right to have nothing to do with Bain. But it’s clear the government wants to implement his report. We have no alternative but to fight that. The union’s national executive has announced strike dates for the end of January and talks with the employers before then. That’s late on. Everything has got to be done now to rebuild the momentum of the campaign or we will be looking at huge pressure on our negotiators to concede in those talks.’

There was anger on fire stations and in control rooms across Britain and Northern Ireland on Monday when the Bain review was published. It takes hypocrisy to new heights. Sir George Bain gave himself a huge pay rise as vice-chancellor of Queen’s University Belfast, and is now on over £160,000 a year – the equivalent of seven firefighters.

Yet he then has the gall to say that firefighters are well paid. His review team was made up of three well off white men (all knighted by New Labour).

They have the nerve to complain that the fire service has too few women and black workers. The core of the review is about cuts. It calls for scrapping Section 19 of the Fire Service Act, which says that chief officers must get the agreement of the secretary of state to close fire stations.

Bain wants the wholesale closure of stations, particularly in inner cities, where land could be sold off for property speculation. In the name of ‘modernisation’ Bain also wants to turn the clock back 60 years, by introducing charges for rescues and answering automatic alarms. The public would pay through higher insurance premiums.

The review says the fire service inspectorate is too concerned with looking at how well fire brigades meet national standards. Instead it proposes a new style of inspections which would focus on how ‘modernisation’ is implemented and on cutting budgets. People may not be happy about cuts to their local fire service. So Bain proposes making chief officers more independent from elected local fire authorities.

Bain and the government complain that firefighters are not putting out fires or rescuing people every minute they are on duty.

The whole point of an emergency service is that people and equipment are there in sufficient numbers when there is an emergency. One of the problems that hits the NHS every winter is that there is no spare capacity to cope with flu and similar outbreaks, for example.

He calls for a ‘fundamental restructuring’ of what firefighters do, so that they take on more and more roles, including those of paramedics. In return there would be an average 4 percent pay increase this year and 7 percent in 12 months time. Not everyone would get even this money.

It would depend on how many extra jobs individual firefighters took on. Bain also calls for savaging the fire service pensions scheme and attacking the shift system.

The government, which has intervened in the dispute four times, wants the Bain report implemented in full. The message from FBU activists on Monday was that the union now has to make it clear that it is prepared for a serious fight and must appeal for wider solidarity. 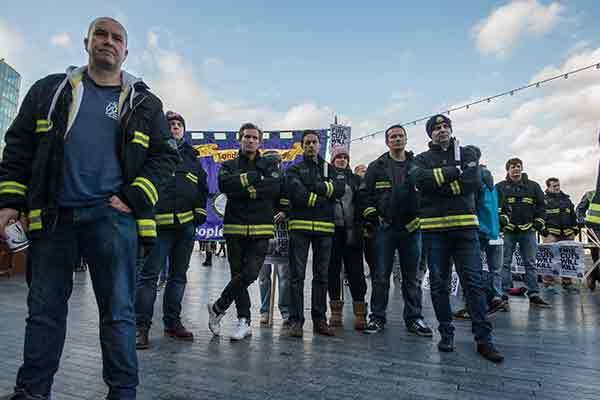