This article is over 10 years, 3 months old
Workers at Barnet council are to strike for a second time in their battle against privatisation.
Downloading PDF. Please wait...
Tuesday 11 October 2011

Workers at Barnet council are to strike for a second time in their battle against privatisation.

The 300 Unison members will walk out on Tuesday of next week.

They are fighting the council’s One Barnet programme—better known as “easyCouncil”, with services outsourced and run like the budget airline.

They previously struck for half a day on 13 September. This time they will strike for the whole day.

The council is “rolling out” the privatisation in stages, and is currently in talks with bidders.

“There is still time to turn this One Barnet tanker around,” said branch secretary John Burgess.

The union is asking the council to put the programme on hold and look at alternatives.

On the day, workers will be picketing from 7.30am at the North London Business Park, where most of them work.

The union is getting members who are not part of the strike to show their support for the action by wearing purple and green—Unison’s colours.

Unison branch chair Helen Davies added that workers would leaflet tube stations—and they hoped to get out and speak to other groups of workers too.

“We want any other workplace, in Barnet or across London, that has a union meeting that day to let us know so we can send a speaker,” she said.

Send messages of support and speaker requests to [email protected] 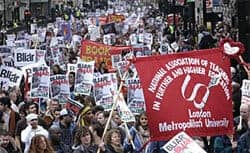 Unions gear up to strike in defence of pensions