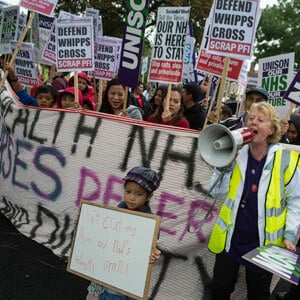 Staff at Whipps Cross and their supporters protested against PFI and the cuts in 2013 (Pic: Guy Smallman)

Health workers are furious with bosses at the Barts Health NHS Trust in east London for running Whipps Cross Hospital into the ground.

The Care Quality Commission (CQC) watchdog delivered a damning report into the hospital and placed it in “special measures”.

The report said “there were delays in patients being assessed and in handovers taking place for patients who arrived by ambulance”. Some received “sub optimal care”.

“It means we’ve been vindicated about what we’ve been saying for the last couple of years.”

The report found a “culture of bullying and harassment” and that “morale was low” among the workforce.

Sam said, “We warned them about the bullying, the job cuts and down banding workers.”

The report found that “the decision in 2013 to remove 22 posts across the trust and down band several hundred more nursing staff has had a significant impact on moral and stretched staffing levels across all services”.

In 2010 the CQC was satisfied with the hospitals and all four had a combined deficit of £8 million. Barts Health’s deficit for this year alone stands at £93 million.

No sooner was Barts Health formed in 2012 through merging four east London health trusts, then bosses began pushing through millions of pounds in cuts to “save” money.

“Lots of people left,” said Sam. “Others didn’t get their jobs back when they’d had to reapply because of down banding and reorganisation.

“This led to low staffing and some wards staffed by agency workers.

Health bosses were pushing through cuts because the trust was haemorrhaging money to the PFI debt.

Carol Saunders from the People vs. Barts Health PFI campaign told Socialist Worker, “The trust is trying to balance an unsustainable debt, with PFI repayments of £2.4 million a week.”

Workers held a meeting last week to discuss the next steps with the local health campaigns.

To stop the crisis in Whipps Cross, the PFI debt must be dropped, and bosses must stop cutting, re-band workers and immediately reinstate victimised Unison union rep Charlotte Monro.

There is still a mood to fight around the NHS.

Fifty Bangladeshi parents and families with disabled children marched in east London on Monday of this week against Barts Health’s cut to their parent advisor service. And hospital porters in Dundee struck on Friday of last week as part of an ongoing pay dispute.

Every trade unionist and campaigner needs to fight to broaden the resistance.