Battle in the classrooms

This article is over 21 years, 0 months old
The Times Educational Supplement advertised over 4,000 vacancies for teachers' posts last week. It's not only in London that the teacher shortage crisis is biting hard. In Hertfordshire young teachers find the cost of living intolerably high. In areas like this over 65 percent of teachers are aged over 40.
By John Berry, secretary of Hertfordshire NUT (personal capacity)
Downloading PDF. Please wait...
Saturday 27 January 2001

The Times Educational Supplement advertised over 4,000 vacancies for teachers’ posts last week. It’s not only in London that the teacher shortage crisis is biting hard. In Hertfordshire young teachers find the cost of living intolerably high. In areas like this over 65 percent of teachers are aged over 40.

Some schools in Hertfordshire have already called for a ballot for no-cover action, and one head teacher has already announced a four-day week. The NASUWT union says it will ballot for action on no-cover. It is time for concerted action by all teachers, involving parents and pupils, to force the government to act over the shortage.

Hertfordshire NUT has organised a rally to coincide with the NUT’s meeting in London which will address how to take action over shortages and the London fringe payments.

Lecturers at Coatbridge College, members of the College Lecturers Association, part of the EIS Scottish education union, held two further days of strike action last week. A further three weeks of two strike days a week are planned. The lecturers’ action led to an HMI inspection team withdrawing on the Tuesday afternoon. This is thought to be a first in Scottish education. This success was followed by a large lunchtime rally at the college gates and a walkout by students.

The lecturers’ strike action is for a decent pay claim, as they have received no pay rise since 1998. This is now the longest running pay dispute in Scottish further education.

Around 450 students from the London School of Economics formed a human chain around the main building last week in protest at the planned introduction of ‘top-up fees’.

The LSE’s fees could be as high as £6,000 per student per year, on top of the existing £1,000 annual charge. The university could levy what it calls the ‘internationally competitive’ rates seen in US universities, where charges reach up to £20,000 a year. At a rally after the event students vowed to continue the fight against the imposition of the free market on higher education.
JAMES MEADWAY

Lecturers at Newcastle College plan to strike on 29 and 30 January after college bosses threatened to sack 128 staff unless they sign a new contract. Iain Owens, a spokesperson for the lecturers’ NATFHE union, says of the planned strike, ‘This isn’t just a protest. It’s an attempt to get the college to move. The branch is prepared for further action.’ The new contracts increase teaching time by 20 percent. A third of staff are standing firm and refusing to sign them, leading to management’s sacking threat.

Parents at two Bristol primary schools have voted to occupy the schools against the New Labour council’s plan to shut them down. The vote came amid cheers at an angry 180-strong meeting. It was followed by a furious 100-strong lobby of the council. Bristol wants to close Gay Elms and Whitehouse primary schools, and an autistic centre. Parents and pupils recently confronted a local councillor. Children aged seven and older were concerned about a ‘big road’ they would have to cross to go to another school. Contact the campaign at Gay Elms School, Withywood Road, Bristol.
RICHARD STEPHENS and RACHEL KENDALL

Parents, staff and students of Burbage School protested on Monday at Hackney town hall against the closure of their school. The school is in the newly fashionable part of Hoxton in London, and a developer is buying up all the surrounding land. nSend messages of support to NUT Rep, Burbage School, Hemsworth Street, Hoxton, London N1.

Over 100 people lobbied Southwark Council in London in protest at plans to hand over schools in the borough to a private firm. 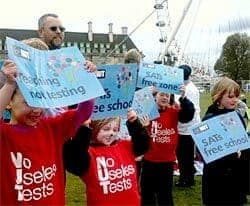 Sats boycott strikes a blow against the market