Battling to ban the bomb

Battling to ban the bomb

A NEW generation is now growing up with the threat of nuclear annihilation and a third world war. George Bush’s terrifying “Son of Star Wars” project, which Tony Blair has given every sign he will support, threatens a new and deadly nuclear arms race. But Bush and Blair’s insane plans are also leading a new generation to organise and protest.

The Campaign for Nuclear Disarmament (CND) is attracting a new layer of activists to protests like the demonstration outside Downing Street last Saturday. They will be able to draw on a vibrant tradition of opposition. In Britain there have been two major waves of protest against the nuclear threat.

The first wave erupted in the late 1950s in response to the British government’s H-bomb tests on Christmas Island. There were marches, rallies, teach-ins and sit-downs involving masses of people. Membership of CND soared after it was launched in 1958. Over 100 branches were set up in the first two weeks alone. By 1960 there were 500 local groups, 100 college branches and 160 youth groups.

The first annual Easter march in 1958 from the nuclear research plant at Aldermaston to London attracted some 4,000 marchers. The numbers swelled to 10,000 when the march reached London. Two years later the size of the regular march had more than quadrupled. Ian Birchall was on the 1960 Aldermaston march. He told Socialist Worker: “There were 10,000 of us marching for four days, and by the final day there were 100,000 people. I was a student at the time, as many of us were. But there were also many trade unionists, ordinary folk with children, as well as religious groups and convinced pacifists. The newspapers had written off the initial protests as involving a few cranks. But by 1960 the movement was so big they could no longer do that. The Tory paper the Sunday Express called us ‘the march of the little men in macs’. The marches were an exciting, educational experience. There was a carnival-like atmosphere but also plenty of debates. I remember sitting up until three in the morning discussing the question, ‘Does capitalism mean war?’ And as well as the big marches, there were smaller protests and meetings going on all the time.”

THERE WAS, however, a tension between the leadership of CND and the activism of many of its members. The CND leadership concentrated on trying to win the Labour Party to supporting “unilateral” nuclear disarmament. This would mean Britain scrapping its nuclear weapons regardless of what other nuclear powers did.

But Labour’s right wing leader Hugh Gaitskell dismissed the vote and promised to “fight, fight and fight again” against the policy. Gaitskell’s outburst appalled many CND activists. Bill Kay, a campaigner at the time, recalls:

“There was a huge CND demo in London of 150,000 yet nothing happened, and we realised that simple protests wouldn’t shake the government. A group of us began to call for civil disobedience-it was the beginning of the Committee of 100.”

The Committee of 100 group organised civil disobedience on a mass scale. In April 1961 the committee mobilised 10,000 people to march down Whitehall. Two thousand protesters sat down and refused to move, and 862 people were arrested, including the wellknown philosopher Bertrand Russell. This kind of rebellion captured the mood of a generation. Despite this the CND campaign began to lose momentum.

Ian Birchall explains, “One reason was because Harold Wilson took over the Labour leadership after Gaitskell’s death in 1963. “He was just as committed to nuclear weapons, but he had a different style. The CND leadership and many Labour left wingers wanted to give him a chance. CND leaders produced a document called Steps to Peace which argued for a policy far short of unilateral nuclear disarmament, which was compatible with the Labour leadership. Unfortunately CND declined through the 1960s and 1970s. But the movement did bring many people into activity for the first time and some of those, including myself, went on to become committed socialists.”

A SECOND wave of struggle against nuclear weapons erupted in the early 1980s. Ronald Reagan was elected US president in 1980 and dramatically escalated the arms race, backed by British prime minister Margaret Thatcher.

The US deployed new cruise and Pershing II missiles in Britain, and Reagan spoke seriously about waging a “limited nuclear war” in Europe. Reagan and Thatcher’s threats brought home to millions of people the terrible possibility of nuclear oblivion.

Hundreds of thousands of people across Britain mobilised against the missiles. The pamphlet Protest and Survive by historian and anti-nuclear activist E P Thompson became an international bestseller. There were massive demonstrations through central London and a flourishing of local activity.

The CND campaign gave thousands of people their first ever taste of political activity-organising debates, film shows and local demonstrations. Socialist Review magazine reported, “Bristol CND has 1,100 members. In Moseley in Birmingham CND claim that about 3 percent of the local population are paid up members. In Leeds, the town CND has 200 members and is reprinting its membership cards to cope with a new influx.”

A teacher from Hackney reported, “There is an immense range of local activities. There have been mass leafletings, pickets of bunkers, street meetings, street theatres, local gigs, regular stalls in shopping areas, local marches, and hundreds of showings of The War Game, an anti-nuclear film.”

In October 1981 over a quarter of a million people joined a magnificent demonstration in London against the missiles. On that one single day in 1981 over one million people marched across Europe-in London, Rome, Amsterdam, Brussels and across Germany.

UNFORTUNATELY, AS in the 1960s, the anti-nuclear protests would eventually begin to dwindle through the 1980s. The CND leadership once again concentrated on trying to win over the Labour leadership, then in opposition. But their hopes in Labour were betrayed. The Labour leadership supported Thatcher’s war in the Falklands in 1982. Then Labour leader Neil Kinnock went on to ditch the party’s support for unilateral nuclear disarmament. Many activists turned to direct action. Peace camps outside the US air force base at Greenham Common, where cruise missiles were to be deployed, became the focus for many activists.

At first thousands mobilised in demonstrations in support of the camps at Greenham and other bases. But increasingly the protests began to revolve around the bravery of a minority of activists rather than making wider links. So the Greenham camp, for example, became women-only and was eventually dominated by a committed few who increasingly adopted mystical ideas.

CND did not pull off mass demonstrations on the streets again. To do that meant a strategy of connecting with wider forces in order to shift Thatcher. Many protest groups were focused on single issues, and this sectional approach dragged down the general radicalism that had been seen at CND’s height. Today there is a great chance to build a wide movement. Since the Seattle demonstration in November 1999 there has been an inspiring, growing wave of protests against global capitalism.

The world capitalist system is driven by economic competition and the nuclear arms race is part of that same system dominated by big corporations, governments and institutions like the International Monetary Fund. The end of the Cold War did not herald a new era of peace. If anything, the world is a more dangerous and unstable place than ever before. This was underlined by the spy plane confrontation between two nuclear powers, the US and China.

The fight goes on against rulers who are prepared to threaten the survival of the planet and its people to maintain their power and profits.

Why I am voting socialist

“I’M NOW a member of the Socialist Alliance after 30 years in the Labour Party. I’m really disillusioned with Labour. I thought they were going to deliver. They’ve continued the devastation of the Gulf War and the “humanitarian” intervention in Yugoslavia was disgraceful. The Socialist Alliance has a fantastic feeling of people working together about it. We’re campaigning together to bring change.”

Budget cuts have made the floods much worse 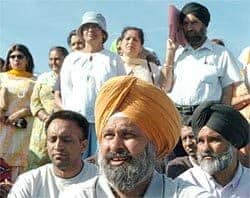 Sacked Gate Gourmet workers: ‘put us at centre of this battle’

Quarter of a million jobs gone under Labour