THE BIGGEST profits “in corporate history”. That was the verdict of financial commentators on the oil companies’ bonanza profit figures out this week. The world’s top four oil companies are on course for a staggering 10 billion profit in just 12 weeks.

The results came as the impact of global warming, which the oil companies bear a key responsibility for, was brought home to people across Britain. The world’s biggest oil company Exxon Mobil had what was called “the most profitable quarter ever by any public company” in the three months to the end of September. It made 3.04 billion profits in those 12 weeks, a 94 percent leap on the same period a year earlier.

Texaco saw an 80 percent profit jump in the same period to rake in 578 million. Chevron, which has just bought up Texaco for 25 billion, had a 135 percent profit rise to 1.17 billion in three months. British-based oil firms Shell and BP were set to announce their third quarter profits this week. They too were heading for an all-time record. Financial analysts predicted Shell was heading for at least an 88 percent rise to around 2.4 billion profits in three months, with BP heading for a jump of over 77 percent to 2.47 billion.

Financial commentators predict, “Believe it or not, the fourth quarter is shaping up stronger than the third” for the oil companies. This would put the top four on course for over 40 billion profits this year. A hefty tax on that could give pensioners a decent rise, put the massive investment needed into rail and public transport, invest in renewable energy, and so begin to seriously curb the growing threat from global warming.

THE FLOODS and storms that hit Britain this week were another sign of the disaster that global warming is bringing. The worst storms to hit Britain in a decade followed the floods earlier this month which were the worst in 40 years. Such extreme weather is one consequence of rising global temperatures. Higher temperatures mean more water evaporates from the seas, and so more rain. They also mean bigger heat differences between land and sea, and that provokes stronger winds.

A report by the official body representing the world’s top 2,500 climate scientists warned this week that the global warming threat was even bigger than they had previously feared. The Intergovernmental Panel on Climate Change says global average temperatures could rise by six degrees centigrade by the end of the century, double its previous forecast.

It is also clear that the emission of greenhouse gases like carbon dioxide from burning fossil fuels is responsible. Oil, coal and gas power stations and road transport are the biggest causes of global warming. Yet world leaders gathering in Holland next week to discuss action on climate change will do little to tackle the problem.

Three years ago the countries at the Kyoto summit pledged a 5 percent cut in greenhouse gas emissions. The world’s biggest polluter, the US, refused even to agree this figure, while most scientists are calling for a 60 percent cut. A radical shift away from burning fossil fuels is needed to tackle climate change.

That demands massive investment in public transport to help curb car and lorry use, and development of renewable energy like wind and wave power. Both are easily possible by taxing big business, starting with the oil companies.

A BRITISH nuclear submarine now sitting in Gibraltar was on the brink of a major disaster that could have spread lethal radiation across Spain. New Labour claimed that HMS Tireless was waiting for repairs to a “minor defect”. But Ministry of Defence officials say this is far from the truth, according to a Guardian report last week.

A crack in the sub’s nuclear reactor cooling system brought it to “the very point of failure”. The Chernobyl nuclear catastrophe in 1986 shows what happens when meltdown occurs. It spewed radiation across Russia and much of Europe. The problem on HMS Tireless is a design fault on all Britain’s nuclear submarines.

They have now been recalled for repair and inspection. They should be scrapped before disaster strikes.

If it ain’t cheap, then don’t fix it

AS THE biggest rail maintenance operation for 100 years was carried out last weekend, alarming details emerged of how rail privateers have been putting profits before safety. The News of the World exposed that track maintenance workers had been told to cut back repairs that cost too much money.

One memo leaked from GT Rail Maintenance (GTRM) said work to repair cracked rails was “not cost effective” and “can afford to wait”. Railtrack has given GTRM the responsibility for maintaining a quarter of Britain’s 20,000 miles of track.

The News of the World story tallies with what track maintenance workers have told Socialist Worker. One maintenance worker from the west of England says rail bosses treat minimum safety standards as “the norm”. “Day to day preventative maintenance has been cut back fourfold,” said the worker. “We’re finding that breaks and fractures in the lines have risen. Yet if we find too many cracks we are told to stop looking for any more. I’ve been told to my face that safety inspections are ‘non-productive’. It’s a simple equation. You either have more profits and less safety, or more safety and less profits. We know which one rail bosses have been choosing.” 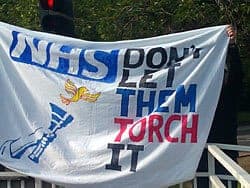