This article is over 10 years, 6 months old
As European leaders met in Belgium on Monday to plot more austerity, the country was rocked by a general strike.
Downloading PDF. Please wait...
Saturday 04 February 2012

As European leaders met in Belgium on Monday to plot more austerity, the country was rocked by a general strike.

Some visiting leaders were brought in by military planes as action shut down some commercial airports, along with the major port of Antwerp.

Thomas Englert, a teacher in Brussels, spoke to Socialist Worker about the strike.

This week’s strike was a big step forward from the first one, which took place in December.

All three main union federations took part for the first time since 1993. And there were far more people out on picket lines.

The whole public transport network was shut down. The workers there are confident and well organised.

They can bring Belgium to a standstill, so they tend to win their strikes. It was the same story with bus workers.

Three unions were represented on the picket lines at the Audi factory. And no one went to work at the main post distribution centre.

The mood at some of the small workplaces was excellent.

We met around 50 electricians at one site—about half of its workforce.

They were very militant, and used slogans like “Without our work, their capital is useless”.

Since last year, union organisers have been setting up “action committees” to get people involved from outside the unions.

In some ways these are inspired by Spain’s Indignados movement, with general assemblies taking place that anyone can take part in.

On the strike day I went around with an action committee to help shop workers shut down the shopping malls.

The unions are very close to the new prime minister, Elio Di Rupo. This means they were reluctant to oppose cuts and call strikes.

But because of government attacks on pensions pressure from rank and file workers has forced into action.

The coalition government aims to make over 11 billion euros in cuts, including raising the retirement age.

A good example of rank and file pressure is a demonstration unions called in December.

And workers on all the picket lines I visited were talking about the need for more strikes.

We have a long struggle ahead of us—but it’s not off to a bad start. 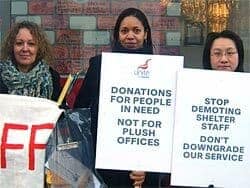