This article is over 17 years, 2 months old
‘The G8 summit is here on our doorstep — to ignore it would be irresponsible. To march against it is not irresponsible, contrary to recent media reports.
Downloading PDF. Please wait...
Saturday 11 June 2005

‘The G8 summit is here on our doorstep — to ignore it would be irresponsible. To march against it is not irresponsible, contrary to recent media reports.

Like so many of my generation, being on the anti-war demonstrations in the last couple of years has helped to radicalise me.

Tony Blair refuses to accept responsibility for taking us to war on a pack of lies.

Governments lose popularity the longer they are in office because nothing ever changes for the better for ordinary people.

Privatisation is another reason why Blair is so unpopular. He talks about giving us more “choice”, but that’s just rubbish.

People aren’t looking for choice — they just want to have decent services that are fully funded. It’s the “market ethos” of the present government that fuels our resentment.

The attitude of the police towards the G8 protests is designed to antagonise and frustrate both protesters and local people.

I hope people march on Gleneagles, and in Edinburgh and everywhere else. I hope the demos are as large as possible and people have a good time making connections with others from around the world.

And I hope that people keep fighting long after they’re gone. The anti-war and anti-G8 movements exist worldwide and that’s really important. Their system is global and so our solutions must be too.’

Belle & Sebastian are performing a fundraising gig for G8 Alternatives on 15 June. For details go to www.g8alternatives.org.uk 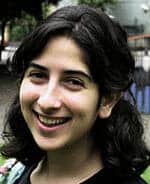 Be one in a million at the G8 protests 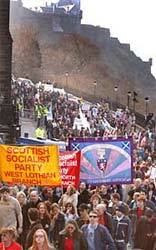