This article is over 8 years, 9 months old
Dave Sewell looks at who the Tories’ cruel benefits cuts affect and the growing fightback against them
Downloading PDF. Please wait...
Tuesday 16 April 2013 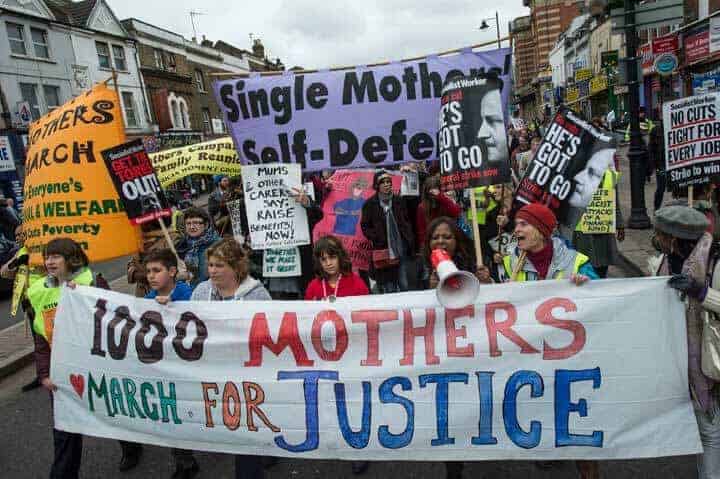 Thousands of people in four London boroughs had their housing benefit cut from Monday of this week to fit under the Tories’ new cap.

They are the first to suffer from a scheme that is set to be rolled out nationally by the autumn capping a household’s benefits at £500 a week.

That’s not as much as the government makes out, especially in London where housing costs can be exorbitant even for the poorest.

As the Tories’ other welfare cuts have come under attack, David Cameron has held up the cap as a reform that is fair.

He asks why a household on benefits should receive more than workers on the average wage. It’s a dishonest comparison.

More than 40 percent of households in inner London receive some housing benefit. The majority of them work but find their wage is too low to pay the rent without benefits.

The Tories have helped bosses keep wages down while landlords put rent up, and now jobs are disappearing too.

“David Cameron is living in a fantasy land when he says we have too much money—he wants to try living here instead,” Marie from Tottenham, north London, told Socialist Worker.

Marie works part time, and spends the rest of the time looking after her granddaughter so that her daughter can to go to college.

“Now I’m expected to find an extra £30 a week,” she said, “or else move somewhere else and have the dog put down and get rid of the furniture.”

Tottenham is part of the borough of Haringey, one of four boroughs where the cap is being piloted along with Croydon, Enfield and Bromley.

Marie was one of more than 500 people who marched through Tottenham on Saturday of last week, in a “1,000 mothers march” called by local reverend Paul Nicolson.

He told Socialist Worker, “The cuts will mean people can’t even pay for the food and the heating. The debts will rack up and there will be more and more of these demonstrations.”

Social worker Juliet faces a massive wage cut at the same time as the benefit changes. “I came to England 28 years ago and I’ve never seen it this bad,” she said. “People say Margaret Thatcher was bad, but I think David Cameron is even worse. He’s taking food out of children’s mouths.”

The protest marched down Tottenham High Road led by mothers chanting, “When kids go hungry, we get angry”.

The loudest section was the youth wing of Turkish and Kurdish socialist organisation Day-Mer. “We’ve got to stand up for our rights,” student Gulizar told Socialist Worker.

“When my brother moves out, they’re going to make us pay for his room.

“My friends have the same problem—the bedroom tax will have a big effect on all the poor and working class people here.”

The march was only the start, with a Tottenham Benefits Justice Campaign meeting planned next week.

“We’ve got to be angry, but we’ve got to get organised,” Jenny Sutton from the UCU union told the rally.

“We’ve got to have meetings on every estate to say we’ll stand together with those who can’t pay the bedroom tax.”

‘Who wants to evict a millionaire?’ ask protests